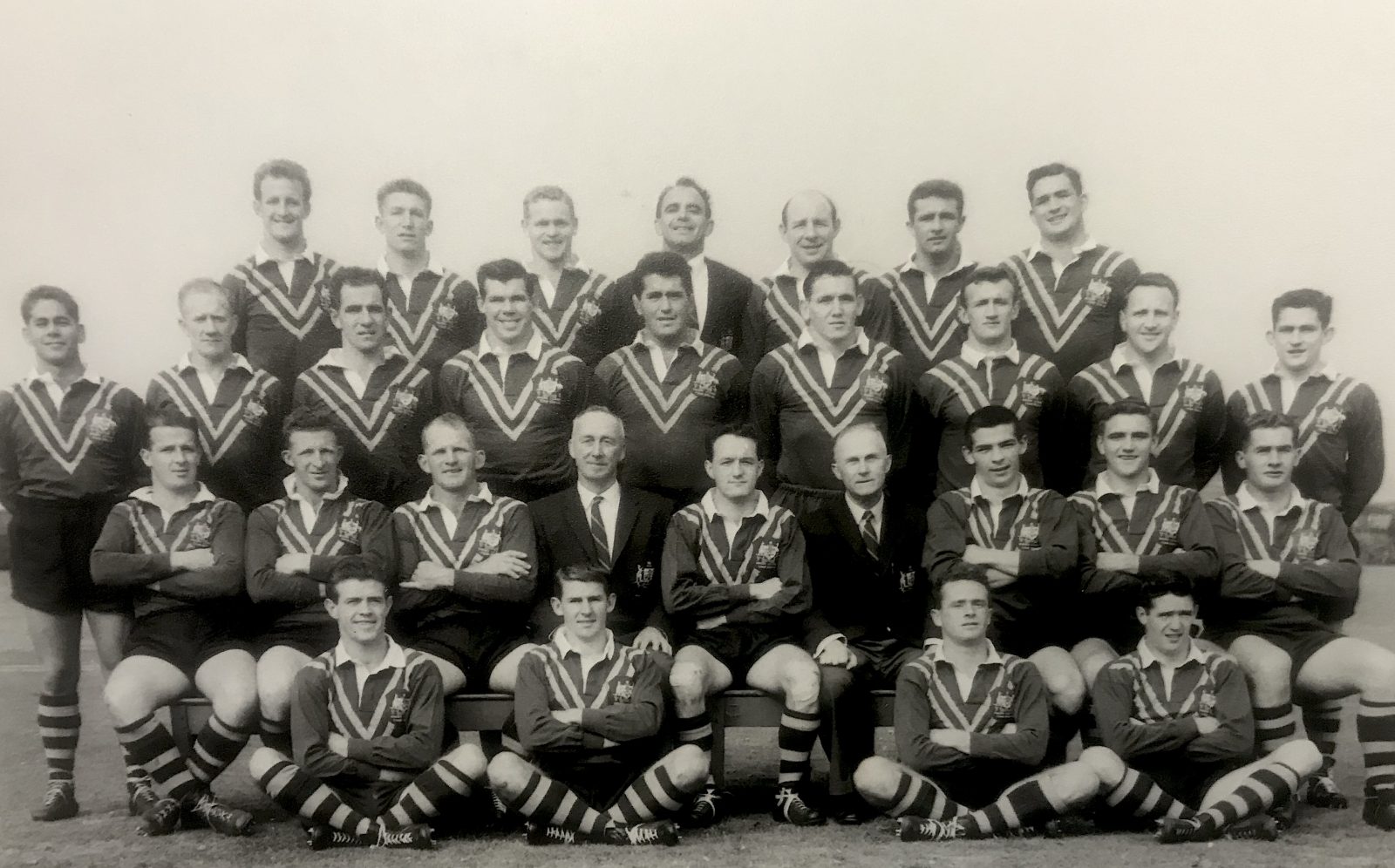 The 10th Kangaroo tour to Europe took place between September 1959 and January 1960 and involved the Australians playing 38 matches, including six Tests.

In addition to playing three Test matches against both Great Britain and France, the Kangaroos played two games against an Italian representative team at the end of the tour.

Australia were coached by Clive Churchill, their most-capped Kangaroo player, and were captained by Keith Barnes, the Balmain Tigers full-back.

The tourists won seven of their first 10 games and were beaten by Lancashire, Yorkshire and Leigh, who edged a thrilling contest 18-17 at Hilton Park. 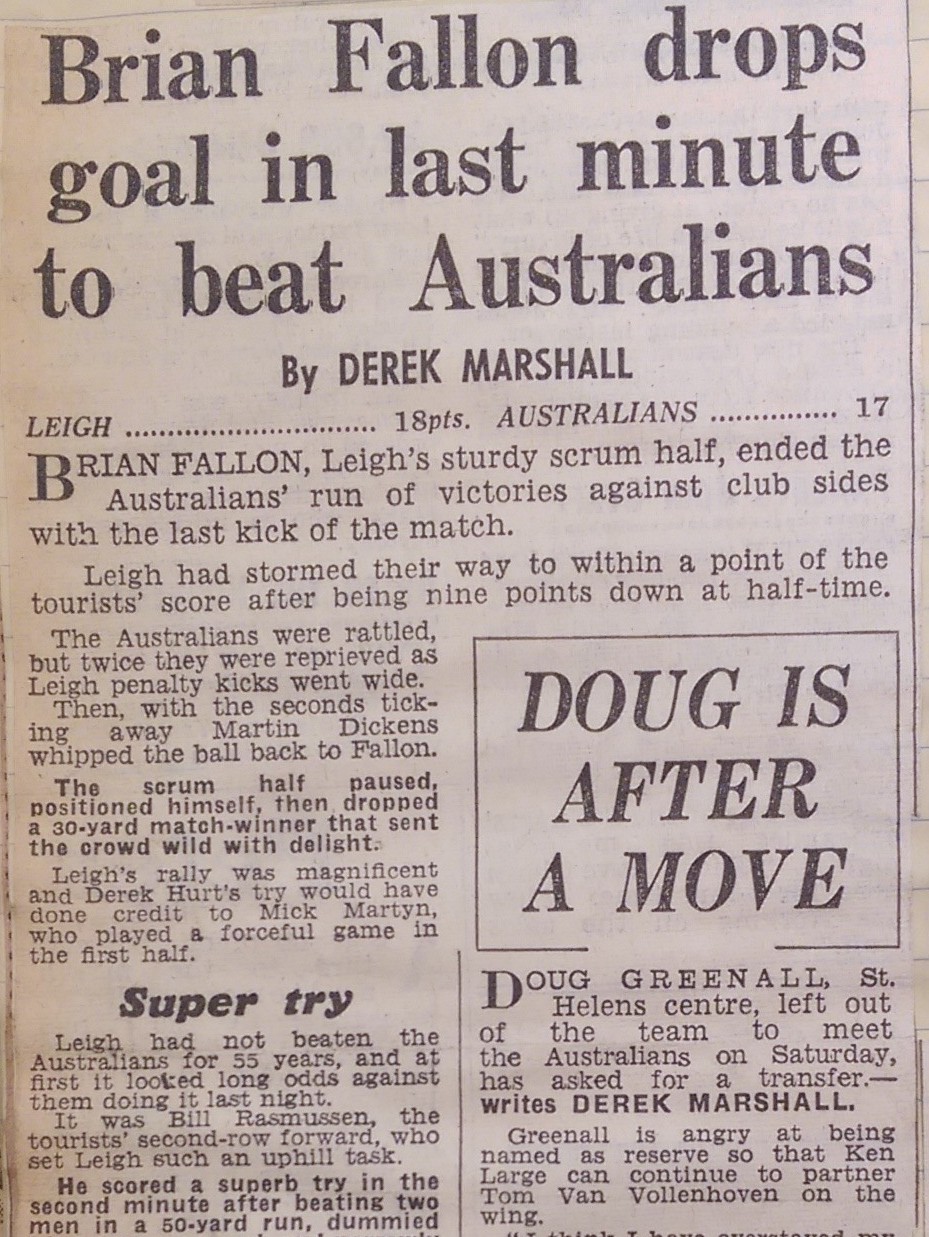 The first Test was held at Swinton, on October 1 when a crowd of 35,224 squeezed into Station Road to see a classic international. Australia led 12-4 at half-time and went on to win 22-14 with a performance which one newspaper described as “the greatest Australian display for fully 30 years.” 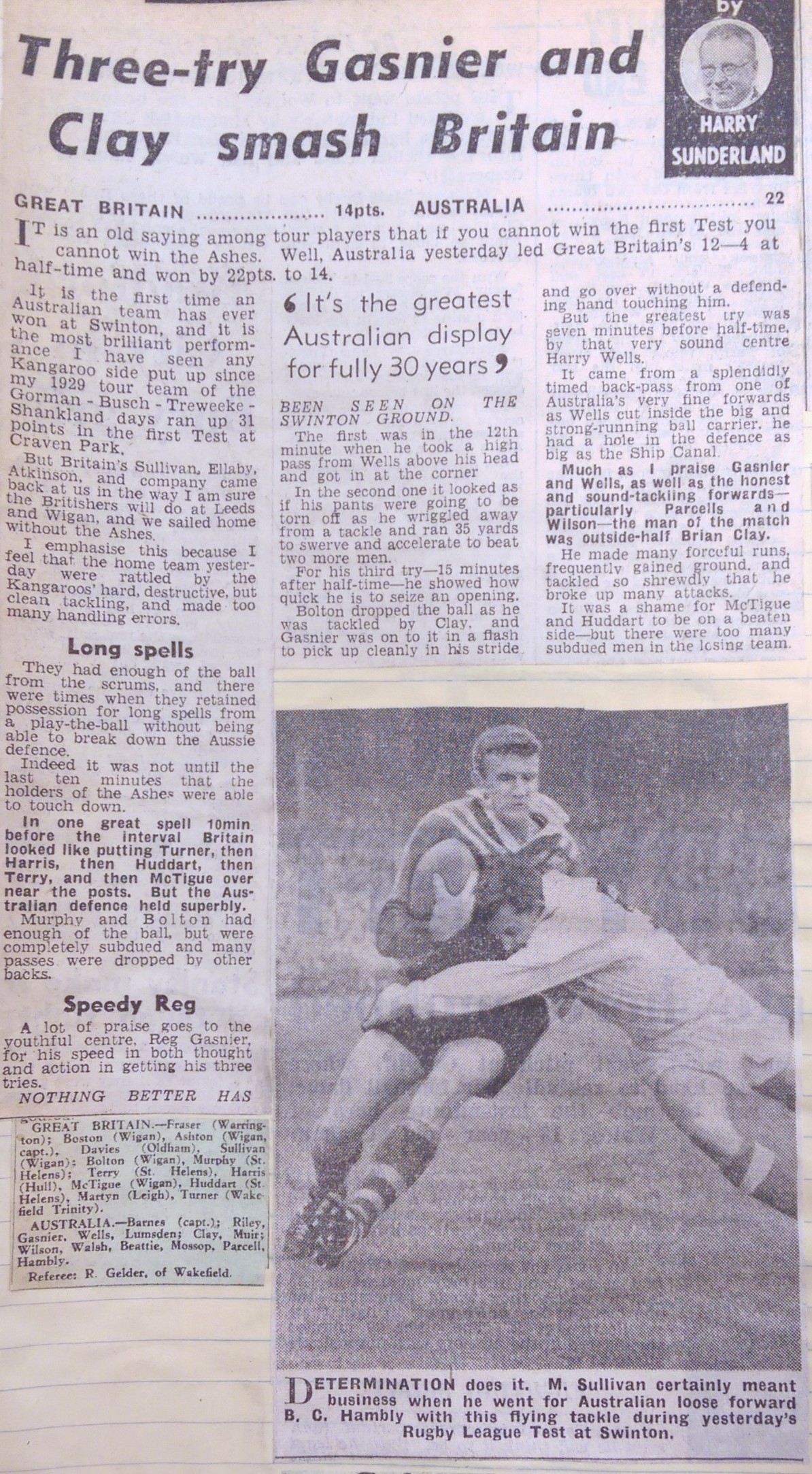 The Kangaroos then hopped over the Channel, to defeat a strong French team 20-19.

After another seven club games in England, the Australians rolled into Headingley looking to secure the Ashes on British soil for the first time since 1911.

Despite falling behind to a first-minute try by Leeds forward Don Robinson, the tourists grew stronger as the second Test progressed and were 10-6 ahead going into the losing stages, when a late try by Johnny Whiteley, converted by Neil Fox, gave Great Britain an 11-10 win. 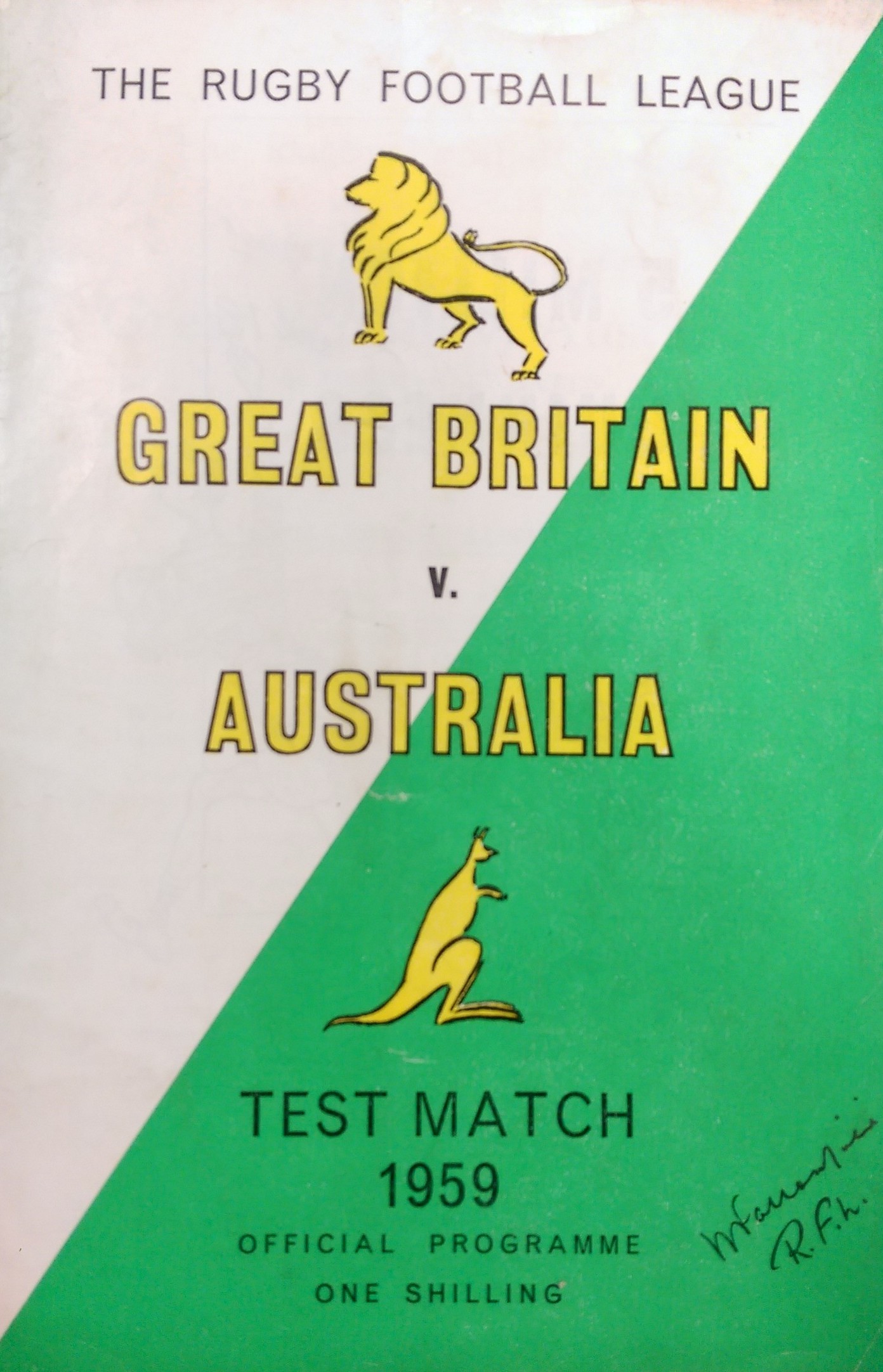 After making light work of the last four club sides, Australia faced up to Great Britain in the deciding Test at Central Park, Wigan, on December 12. The game was something of a disappointment in terms of spectacle, with the great Harry Sunderland reporting that “it was too much of an aggressive battle with both sides trying to barge their way through.”

The match ended 18-12 to the home team, who took the Ashes with tries by Ike Southward and Neil Fox, who also landed six goals. 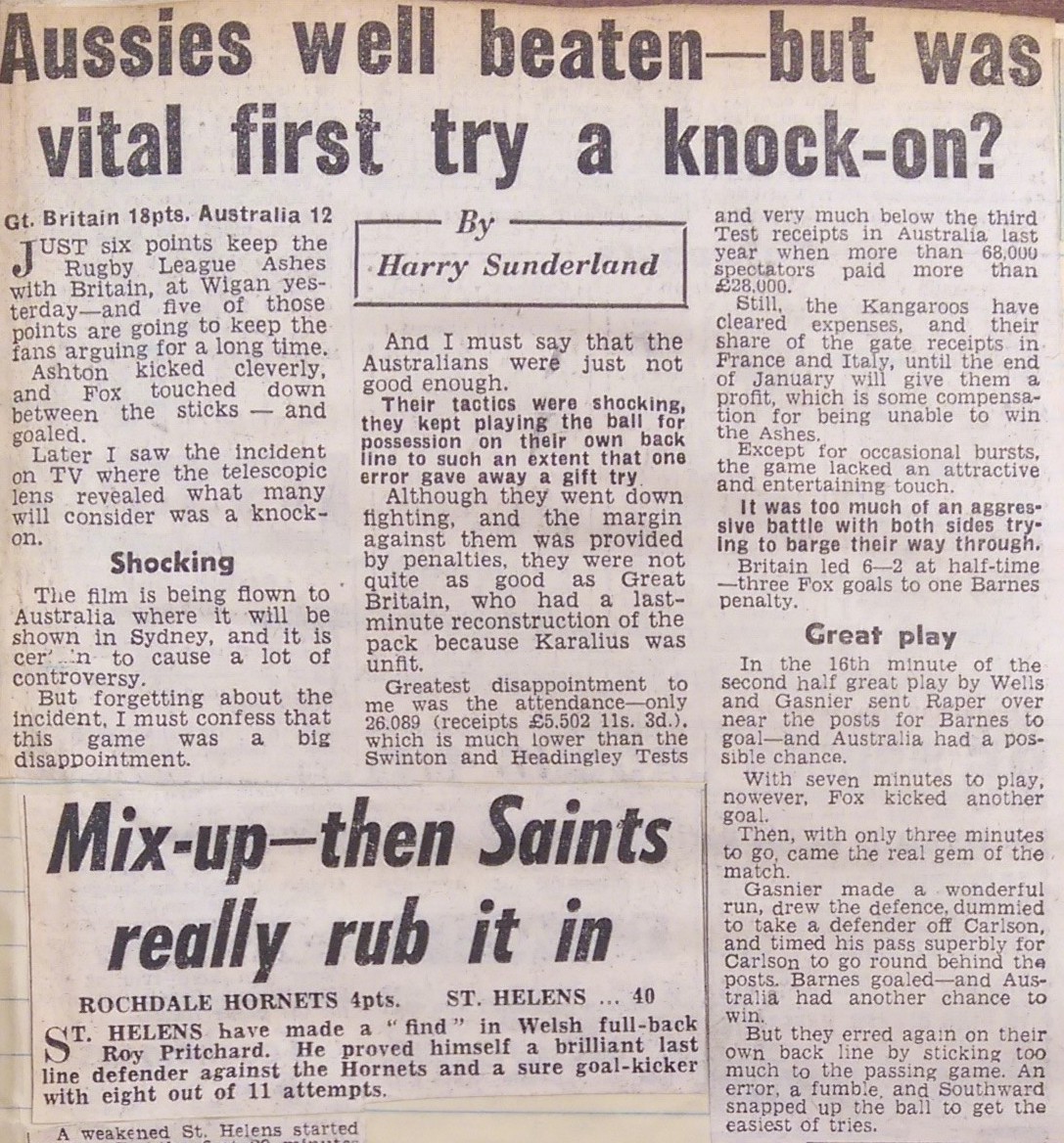 Following on from this defeat, the Kangaroos jumped aboard a ferry for their continuing Test series against France. They proceed to demolish the remaining two games, winning 17-2 in the second Test and 16-8 in the final Test

This winning streak continued in Italy, where victories in two matches played on successive days on January 23 and 24 rounded off the tour.

Each of the item photographed can be found held within Heritage Quay, located in the University of Huddersfield, where most of Rugby League Cares’ wonderful collection is held, free for the public to view.

Here is a list of some of the items from and about the 1959-60 tour with their catalogue code: