Rugby league giant Eorl Crabtree believes players are realising what a brutal career they have chosen, as the sport faces up to an uncertain future.

The former England international has urged everyone involved in the game they must learn to adapt and evolve through what is a “scary time” for Rugby League despite the recent £16m government loan to safeguard its immediate future.

Speaking to host George Riley on the new Rugby League United Podcast, Crabtree opens up about his own life and career, and says he feels the global pandemic has served as a huge reality check for everyone involved in the game.

“It’s a scary time for our sport. That Government loan will need paying back. People can earn a heck of a lot more money doing something other than playing rugby. It is a lifestyle you choose and it is not for the glamour,” he says. “We have a tough period ahead as a sport.”

Crabtree is currently on furlough leave from Huddersfield’s hospitality staff since retiring as a one-club man who played over 400 times for the Giants. He believes a career and life in rugby has helped build the mental resilience to deal with the anxiety and uncertainty of the current worldwide situation.

“You learn to adapt. As human beings we have to evolve. You have to think of other people who are in a tougher position,” says Eorl.

“I love the sport but embracing the future is important. I’ve seen players go through hell because they hold onto the past. You can’t do it.  You have to let go of it and embrace the battle ahead. I hope we can learn to be more respectful of the world.” 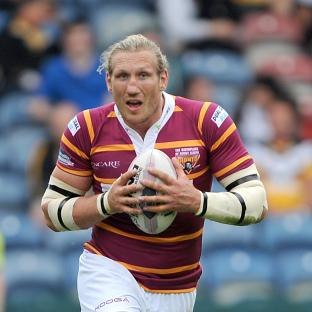 In a wide-ranging interview, Eorl opens up on the highs and lows of his career in Rugby League and how he has worked hard on his mental fitness to manage setbacks.

He discusses what he describes as “the ridiculous excuses” that saw him frozen out of playing for England and removed from the promotional video for the 2013 World Cup. And the tough coaching tactics that gave him perspective when he endured the toughest year of his life.

That year began with losing a promising TV media career without communication nor explanation.

“I felt I deserved more respect than that,” he says. “My dad had a stroke the few weeks later, then Huddersfield told me I wasn’t in the salary cap the following year. That was the toughest year of my life.”

Eorl believes tough times prompt the building of resilience to future setbacks, and that perspective on life means he has no regrets.

“I have different outlets to manage anxiety and stress – cycling, running, gym, speaking to my mates, and my parents. I enjoy exercise, going out, food, and going to drink coffee. That is my outlet. Meeting people, chatting, getting things off your chest from both sides.

“I don’t regret giving it a go as a professional but I’ve never sought glory. A trophy at the side of my bed doesn’t make me sleep better at night. I don’t see myself as a normal rugby player. I’m one of the softest players in rugby league and I couldn’t care less. I love my life the way I am.”

The new weekly Rugby League United podcast is produced by the independent charity Rugby League Cares and is available to watch every Thursday on the RL Cares website.