Heritage project shows that Rugby League really is in the blood 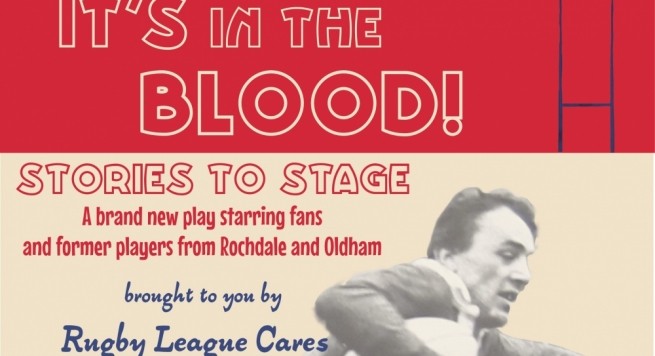 The important role Rugby League plays at the heart of its communities has been underlined by a heritage project in Oldham and Rochdale which has been hailed “an outstanding success.”

Run by Rugby League Cares, Stories to Stage captured the memories of people from both towns and wove them into an entertaining theatrical production featuring former Oldham and Rochdale Hornets Rugby League players.

The play, It’s in the Blood! was directed by award-winning playwright Mick Martin and performed at four venues in the Pennine towns where it delighted audiences from all kinds of backgrounds.

Heritage consultant Trizia Wells, who led the project and worked alongside Mick on the production, said the whole experience had been uplifting for everyone involved, from the people who shared their memories of Rugby League in Rochdale and Oldham to the writing team, the performers and members of the public who attended.

“It has been an outstanding success and the feedback we’ve received has been fantastic,” said Trizia.

“At times the project took on a life of its own and the final outcome was not what we had envisaged at the start, which made it all the more enjoyable.

“We didn’t anticipate the former players being involved like they were and they were a joy to work with: it wouldn’t have happened without them.

“The majority of our audience were Rugby League fans and a lot of them had not been to the theatre before or were attending for the first time in many years: it was the involvement of some of their heroes that brought them in.

“We also had lots of people come along who knew nothing about Rugby League and they were just as fascinated by the stories they heard.”

The youngest member of the cast of It’s in the Blood was just 14 with the oldest being 80-year-old former Rochdale, Oldham and Great Britain player Malcolm Price.

“The play brought together young and old, rugby fan and non-rugby fans in a meeting of minds that was brilliant to see,” added Trizia. “Some really strong inter-generational bonds have now been forged.”

You can see the full performance of It’s in the Blood! by clicking here.