Ahead of the Game helping Amy aim for World Cup glory 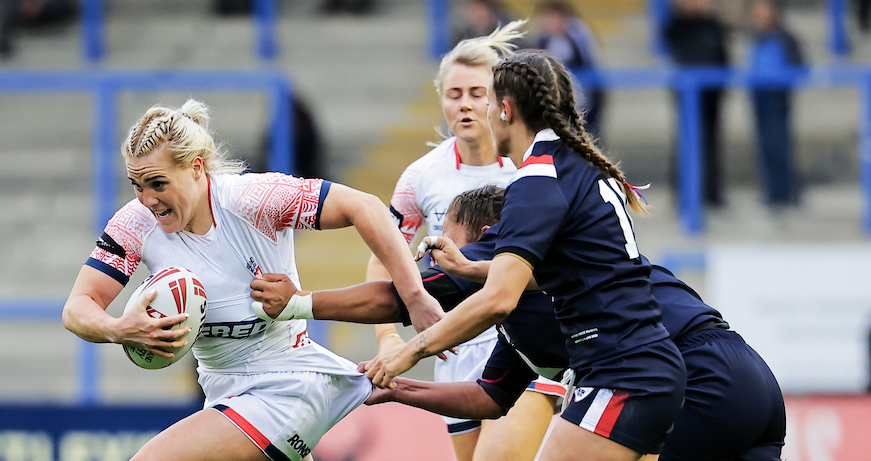 In this exclusive feature from Rugby League World magazine, our Community and Welfare Officer Amy Hardcastle outlines how delivering Movember Ahead of the Game for Rugby League Cares is fuelling her ambitions on the field…

The dust had hardly settled on her spectacular start to the new women’s season before St Helens star Amy Hardcastle turned her attentions to making an even bigger impact in the sport.

With the plaudits from her impressive four-try haul in a 68-0 Challenge Cup victory over Barrow still ringing in her ears, the best centre in the women’s game continued her day job delivering a mental fitness workshop to youngsters in Salford.

The 33-year-old joined Rugby League Cares as a Community and Welfare Officer at the start of the year and is revelling in a role which is enabling her to make a positive difference to the lives of men, women and youngsters in rugby league communities.

Hardcastle is one of a growing group of current and former players employed by RL Cares to deliver its hugely successful mental fitness programmes, Offload and Movember Ahead of the Game.

The job involves Amy visiting community and professional clubs and workplaces across the sport’s heartland to share tips, advice and tools needed to build, and maintain, healthy levels of mental fitness, and enjoy happy, fulfilling lives on and off the field.

“I’m absolutely loving it, especially the sessions we deliver to young people, many of whom have really had it tough over the last few years,” said Hardcastle.

“The sport has worked really hard to break down the lingering stigma around mental health and programmes like Movember Ahead of the Game are proving really successful.

“There was nothing like this around when I was a teenager and I realise now how Ahead of the Game would have helped me and all my mates.”

Hardcastle had been working as an NHS healthcare assistant on the Covid-19 frontline at Calderdale Hospital in Halifax until the opportunity to join RL Cares presented itself at the end of 2021. 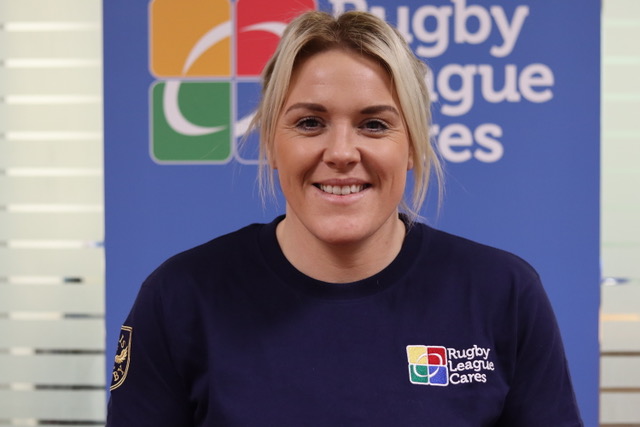 RL Cares had long recognised the impact current and former players could make in their communities and alongside full-time staff members like Keith Senior, Francis Stephenson, Paul Wood and Steve McCormack, the charity contracts a growing team of stars to work on its community programmes.

The success of Movember Ahead of the Game, in particular, created the need for more full-time roles and Hardcastle jumped at the chance to change careers alongside Bob Beswick, the former Widnes, Leigh and Ireland player.

“I had so many transferable skills from my time working in A&E and saw the move as an opportunity to develop myself professionally,” said Hardcastle.

“I asked a lot of questions about whether RL Cares was right for me and it made complete sense to leave the NHS.

“Three months in and I have no doubts that I made the right decision. It’s a fantastic team to work with and their total belief in me has made me reconsider who I am and what I can do.

“People like Keith, Bob and Emma Goldsmith (RL Cares’s Head of Community) have seen things in me I didn’t have the confidence to believe in myself.”

The change in her outlook and approach has surprised not just Hardcastle but many of her friends and family members.

“People have been pointing out over the last few weeks how I seem to be more positive, and I can only put that down to the work I do with RL Cares,” she added.

“Previously if I made an error in a game or had a bad training session, I’d let it eat away at me, but now I don’t waste energy on such negative thoughts. It’s definitely making me a better player.

“These are the kind of things I share with people at Ahead of the Game: when I started, I thought I was just helping them but it’s clearly helping me!

“Working at RL Cares allows me to help people in the communities I really care about and it’s also helping me personally in ways I never thought possible.

“As the mum to a daughter who’ll be going up to secondary school soon, listening to the young people I meet at Ahead of the Game sessions gives me insights into many of the issues the younger generation faces. That’s really helpful.

“RL Cares have also supported me 100 per cent with my rugby career. I no longer have to worry about swapping shifts with colleagues to be able to get to training or play, and that’s making a world of difference.”

That difference was evident when Hardcastle made a dream start to the 2022 season in mid-March as St Helens demolished Barrow 68-0, a performance which bodes well for her ambitions for the rest of a year which ends with the delayed World Cup.

“I have three main goals this year: to stay fit and healthy; to win another treble with St Helens; and to help England win the Rugby League World Cup,” said Hardcastle, a player who already has 19 England caps to her name and a reputation as one of the most respected figures in the women’s game on both sides of the world.

A veteran of two World Cup campaigns, she was the only English player named in the women’s team of the decade by the Australians two years ago, an achievement that is totally earned.

The 2017 World Cup ended in disappointment for England, who were beaten heavily by New Zealand in the semi-finals, and while the host nation will be widely fancied to do better this autumn, Hardcastle warns against drawing parallels with what happened five years ago.

“The game has changed so much since then and there’s a different set of girls playing now, so it’s a bit of an unknown really,” she said.

“We worked extremely hard  last year and are now working even harder to continue to become fitter, stronger, faster and more clinical. I do believe if we continue in this way we have every opportunity of lifting that World Cup in November.”

For now, Hardcastle is happy to play her own role in inspiring – and being inspired by – future generations of women players, both through her exploits with Saints and in her role at RL Cares. 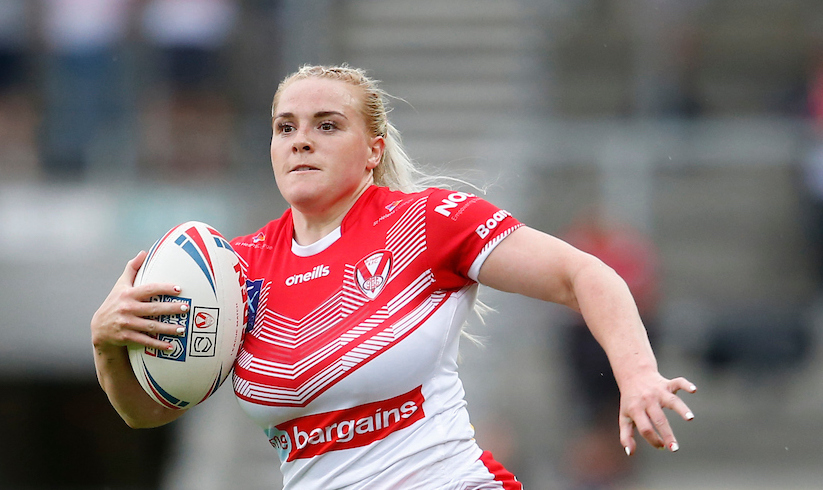 “I delivered an Ahead of the Game session to girls at Queensbury in Bradford a few weeks ago and it was a wonderful experience,” she said. “I got a warm welcome when I arrived and they were really attentive to what we spoke about.

“I came away heartened not just by the fact that our game is in good hands but by the quality of the people we have in it.

“To be honest, wherever I’ve been over the last few months I have met so many supportive people. It’s a good time to be involved in Rugby League.”

Movember Ahead of the Game sessions are delivered free by RL Cares to all junior players, their parents and coaches as part of the RLWC2021 Mental Health Charter. To book your free session email info@rlcares.org.uk