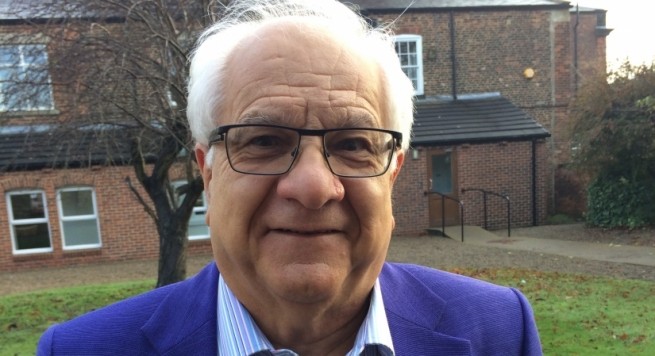 Rugby League Cares has congratulated Tim Adams after the charity’s chairman was awarded an MBE in the New Year’s Honours List.

Tim, who is also chairman of the RFL Benevolent Fund and a trustee of the Northern Racing College, receives his award in recognition of his services to horse racing and Rugby League.

One of the key figures behind the formation of the RFL Benevolent Fund in 2005, Tim has helped make a positive difference to the lives of hundreds of injured players.

A former director of Huddersfield Giants and Sheffield Eagles, he was also a member of the steering committee that oversaw the creation of Super League in 1996.

“The MBE reflects on the importance of a number of people in my life, most notably my wife Sue who has been totally supportive of everything that I have done.

“Sue has been in a wheelchair for the last 41 years and she is a real inspiration to me. It is because of Sue that I love to help people in a similar position.

“I would like to say a big ‘Thank You’ to a lot of people, especially Steve Ball, the Benevolent Fund’s general manager, and the charity’s trustees.

“The people involved in the Northern Racing College, including Dale Gibson and Jack Berry, do a great job and it’s a pleasure working with them.”

Rugby League and racing are Tim’s two great passions and he feels there are strong similarities between the exponents of both sports.

“If you play Rugby League you need to a lot of physical and mental toughness and the same applies to jockeys, especially jump jockeys,” added Tim.

“Both sports do all they can to ensure the safety of players and jockeys but, sadly, accidents do happen and I feel privileged to be in a position to help.”

The RFL Benevolent Fund was set up following a chance encounter in an elevator at the Millennium Stadium in Cardiff, and the charity has gone on to help hundreds of players whose lives have been affected by injuries sustained playing Rugby League.

Tim explained: “I was in the lift at the Challenge Cup final with Gary Hetherington and Nigel Wood when a volunteer stepped in doing a bucket collection on behalf of Matt King, who had suffered a spinal injury playing for London Broncos.

“We all chipped in but then soon got to talking about how unsatisfactory it was that seriously injured players could only rely on bucket collections and insurance.

“Within a few weeks we had met in Leeds and formally constituted the RFL Benevolent Fund. Because I had more time on my hands than anyone else they made me chairman!

“Since then the Benevolent Fund has done some great work. We have around 20 players who we help on a permanent basis and through our hardship fund we have been able to help hundreds more who have been seriously injured and, thankfully, gone on to recover.”

One of the first fund-raising ventures for the RFL Benevolent Fund was the inaugural RFL President’s Ball, which takes place on Saturday (January 7) at the Queen’s Hotel in Leeds with support from new RFL President, Air Commodore Dean Andrew.

“My MBE is a tribute to all those who continue to help us do what we do for injured players and jockeys.”