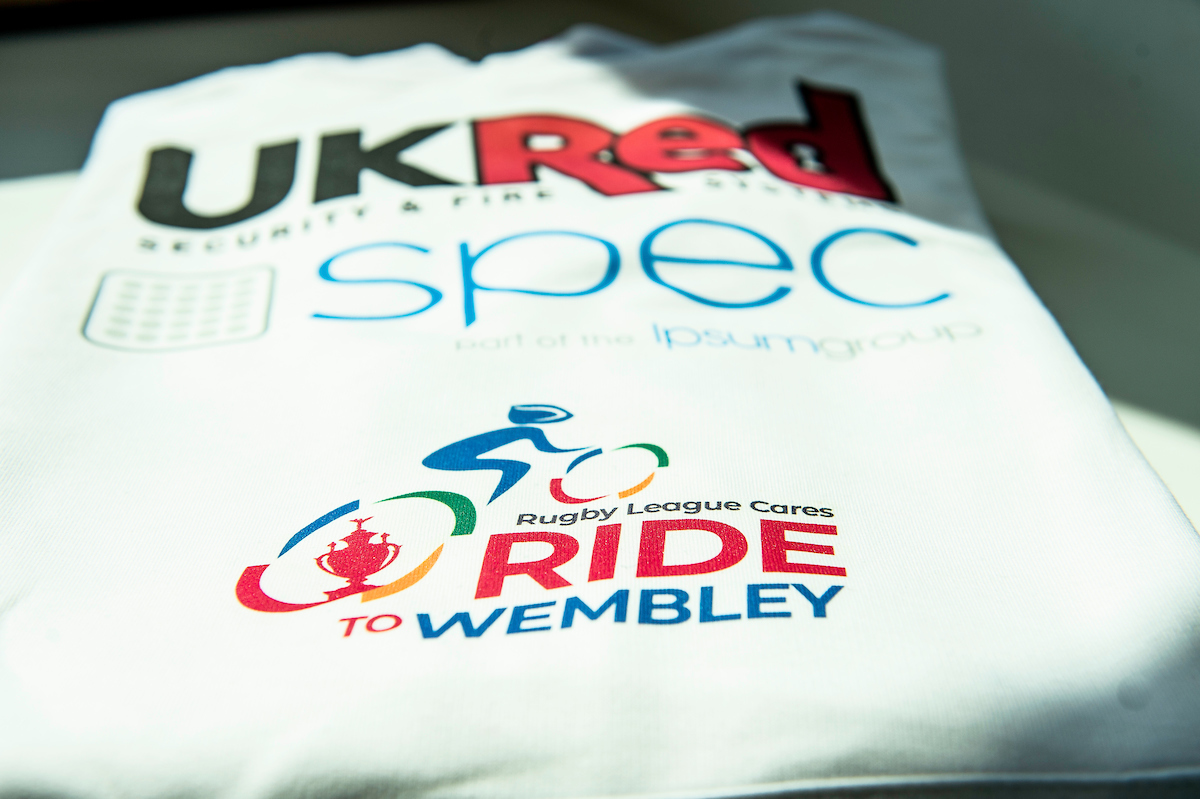 Here are the 23 lycra-clad heroes who will take the road less travelled on the 2019 UK Red Ride to Wembley: 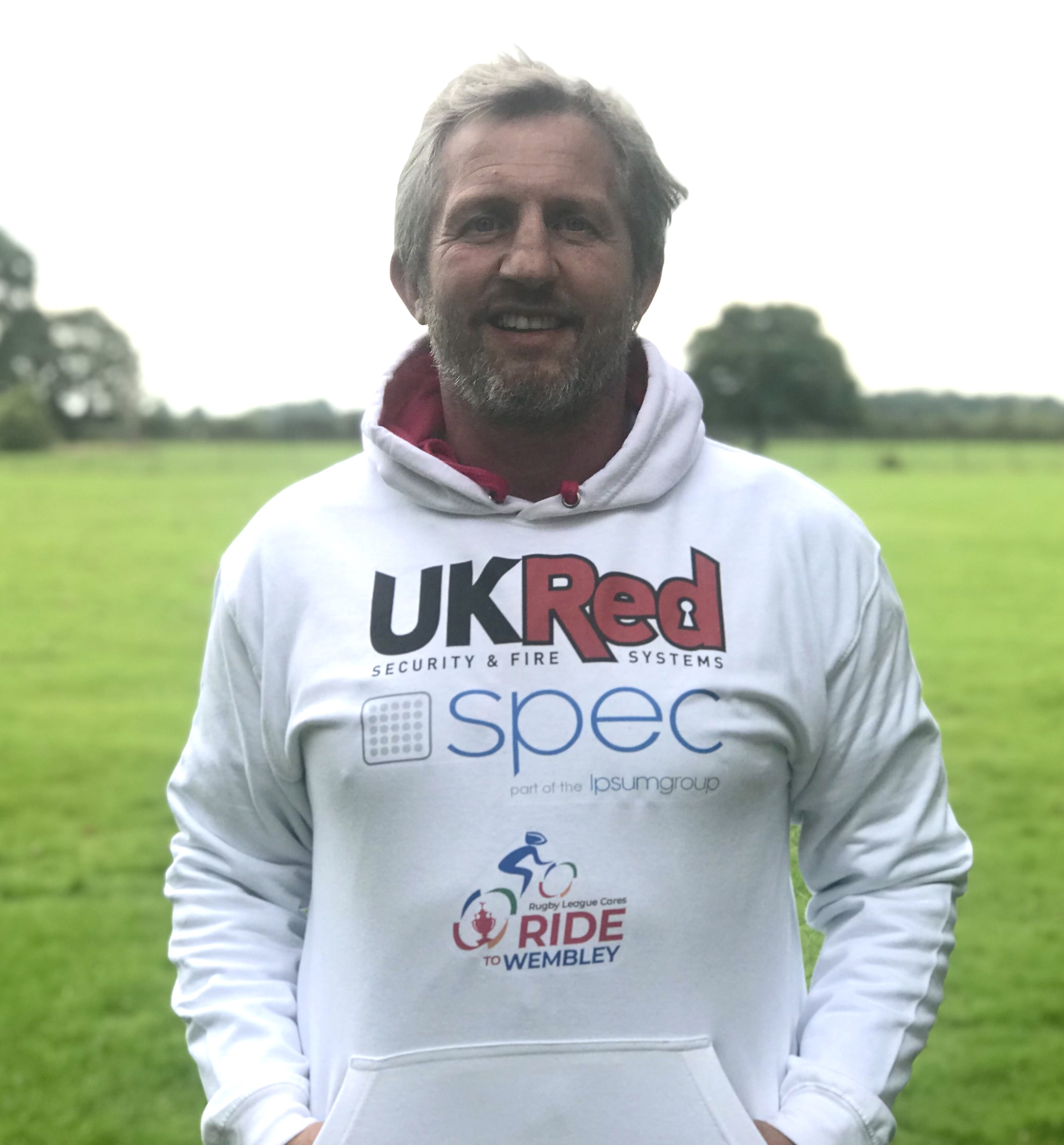 Denis is a former Wigan and Great Britain international back row who is now Director of Rugby at Gateshead Thunder. He was named Man of Steel in 1995 and four years earlier collected the Lance Todd Trophy as man of match in Wigan’s 1991 Wembley win against St Helens. Denis was capped 32 times by Great Britain and was a Lions tourist in 1990, 1992 and 1996. He is planning to ride to Wembley without getting a single training ride in. His backside will love him for that… 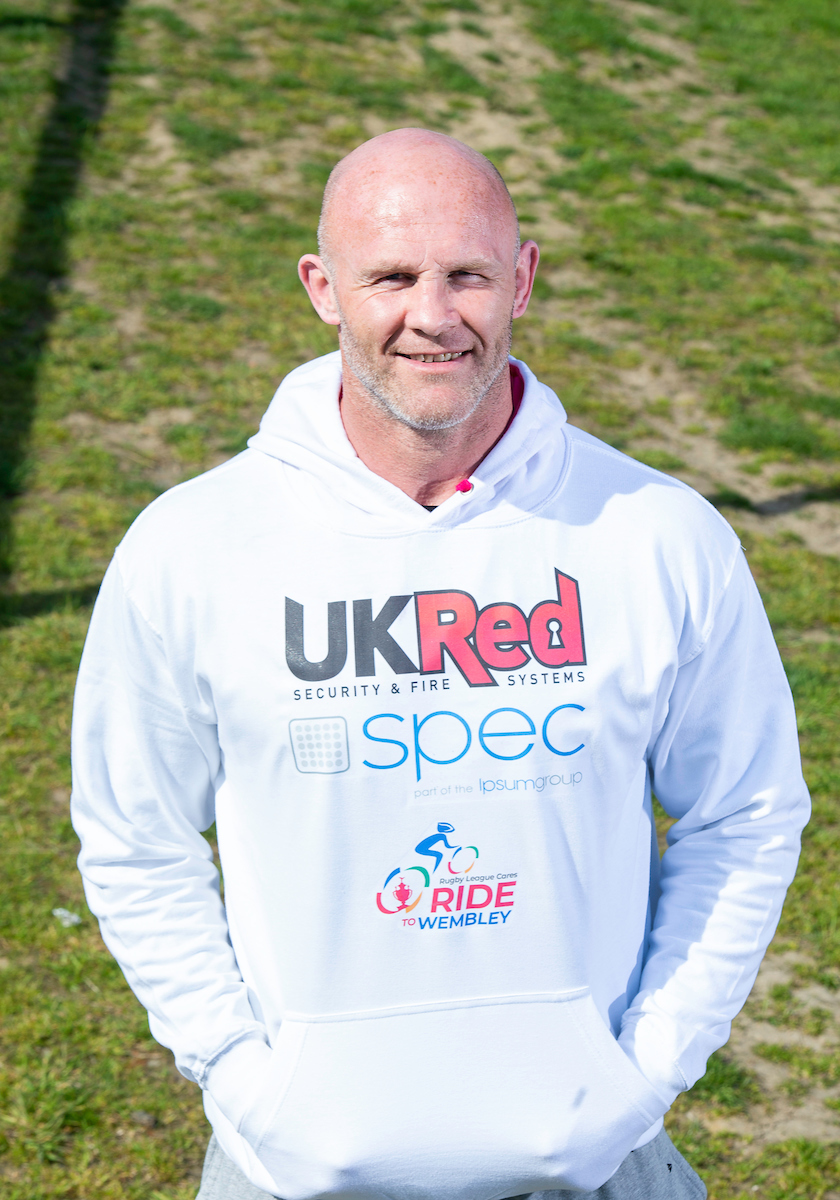 Keith started his RL career at Sheffield Eagles where he was a member of the team that sprang the biggest upset in Challenge Cup history with victory over Wigan in the 1998 final at Wembley. He spent most of his career at Leeds Rhinos, winning three Super League Grand Finals, and gained 33 caps for Great Britain. Keith is now assistant coach at Sheffield Eagles and will be at Wembley on Saturday when the club take on Widnes Vikings in the 1895 Cup final.  He is also player support officer for RL Cares and not as grumpy as he often likes to make out. 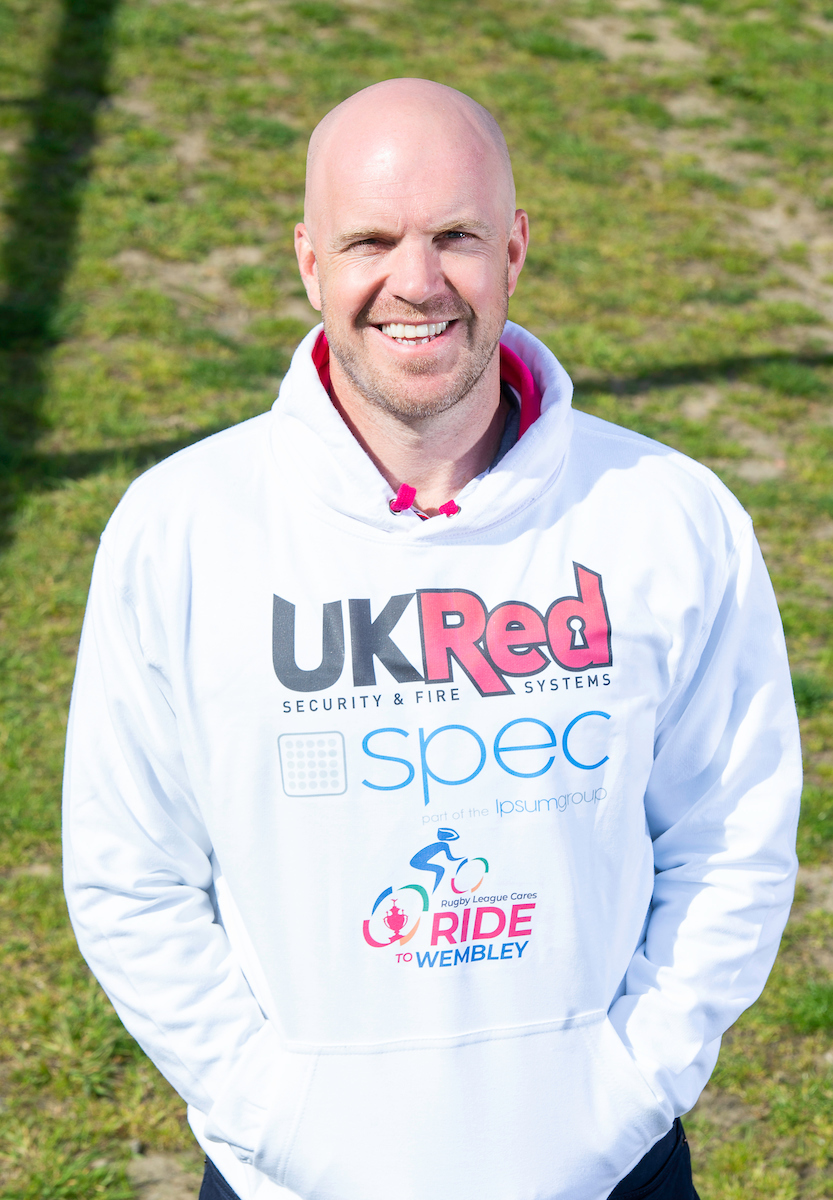 James is a former Dewsbury Rams and York player who moved into sports administration following his retirement, when he went on to work at Hull KR before being appointed chief executive at Wakefield Trinity. He is Managing Director of Wakefield-based Yorkshire Boilers and JAM Marketing and Media.  James completed Ride to Wembley in 2017 and 2018, despite the unique nature of his comedy bike wheels. 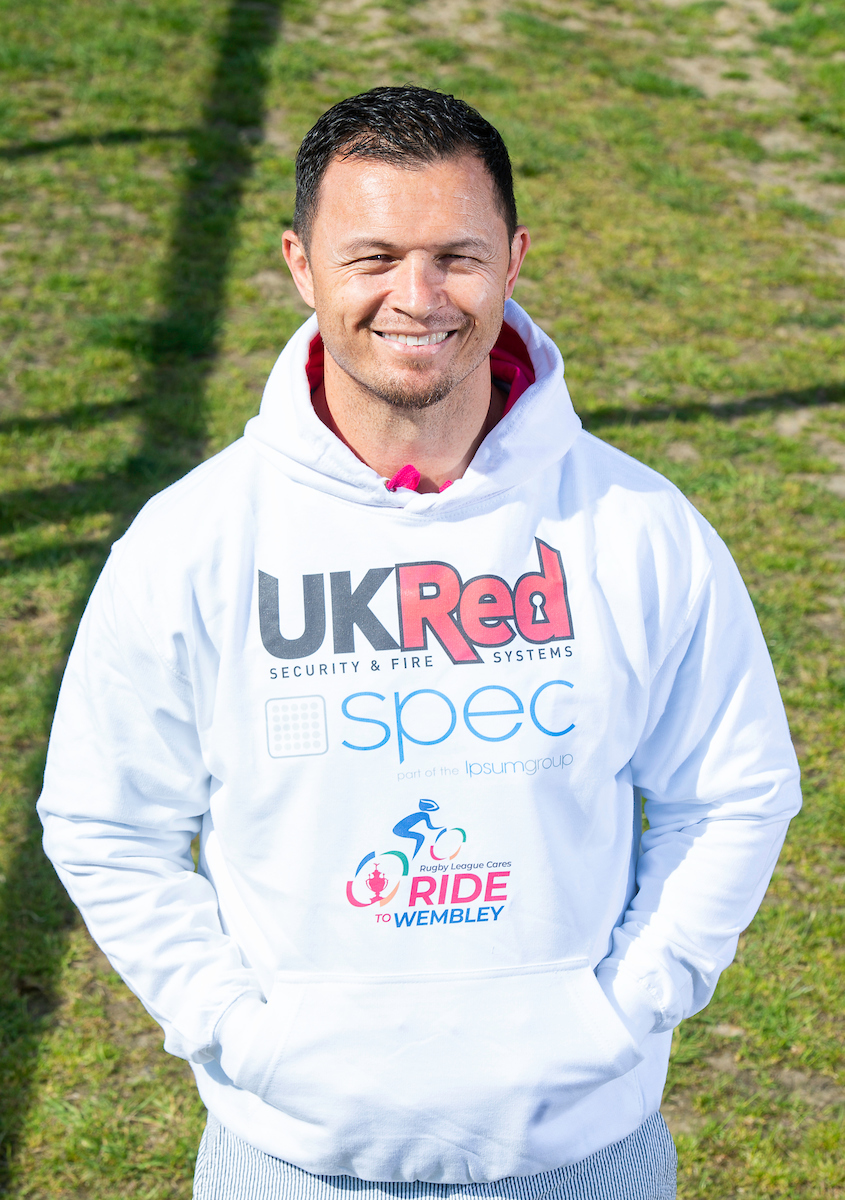 Robbie was the first player to score a hat-trick of tries in a Challenge Cup final at Wembley as member of the Bradford Bulls team defeated by St Helens in 1996, when he won the Lance Todd Trophy as man of the match, He was an integral figure in Bradford’s success between 1994 and 2005, when he helped the Bulls to four Super League titles. Robbie was capped 29 times by New Zealand and now runs his own marketing agency, as well as being a member of BBC TV’s matchday commentary team. 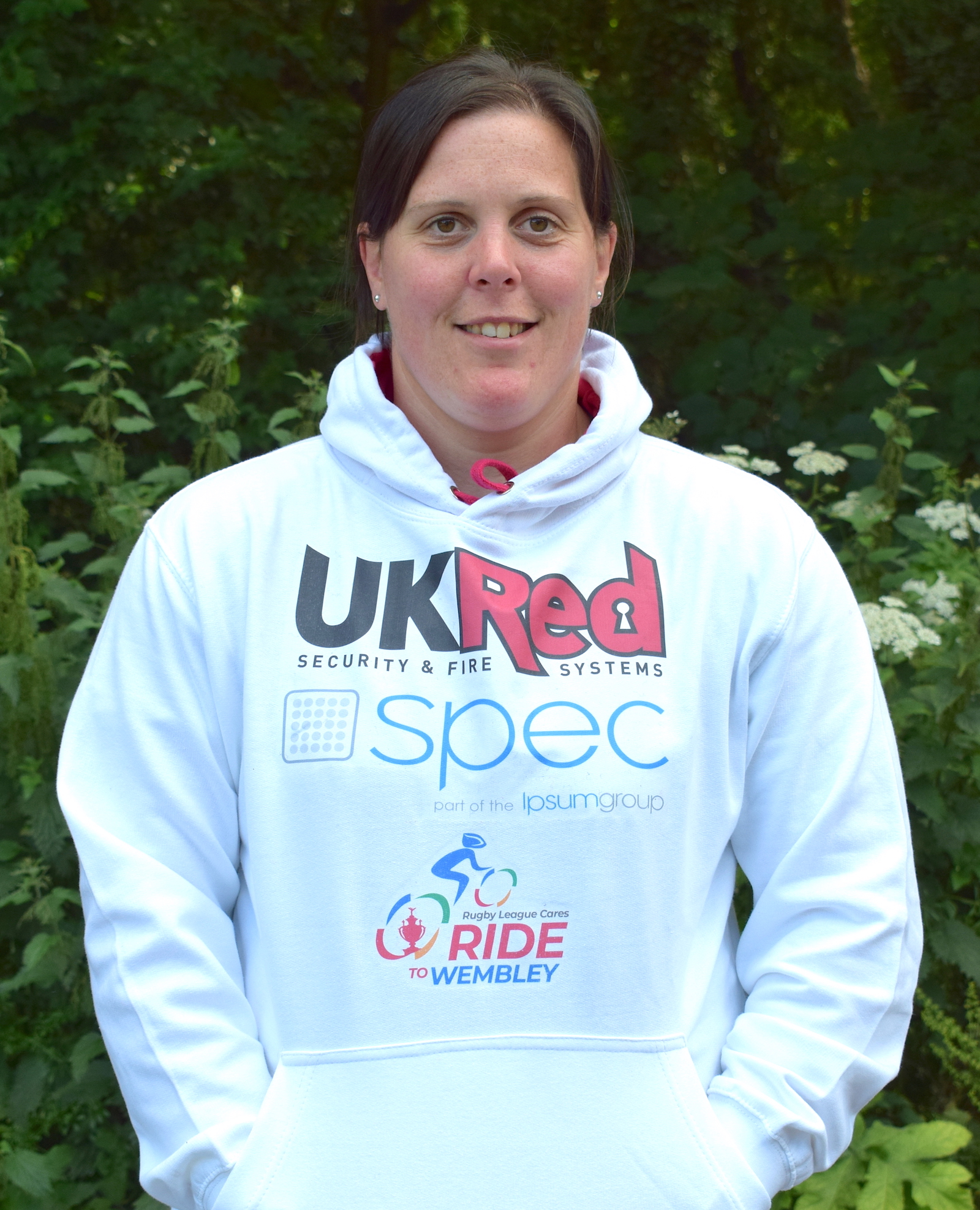 Andrea is the most-capped player in the history of the England women’s Rugby League team, gaining 24 caps in a 16-year international career that saw her play in four World Cups. She is a prop with Featherstone Rovers, who she led to a Grand Final and Challenge Cup double in 2012, and captained in the first Women’s Super League Grand Final in 2017. Andrea combines her rugby career as a community sports coach based in Sheffield. 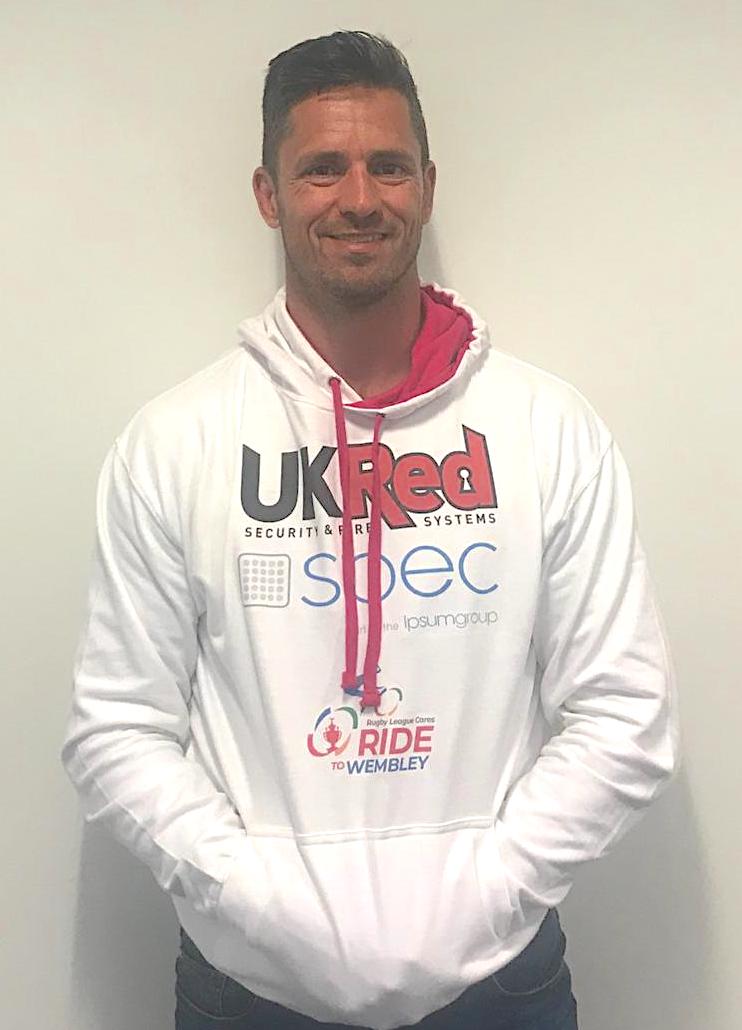 Nathan played at the highest level for his home-town club Salford, Bradford, Leeds, Wigan and Leigh, where his career was ended by a knee injury in 2008. He collected a Challenge Cup winners’ medal with Bradford in 2001 as a try-scorer in their 24-18 defeat of Leeds at Murrayfield, and made four appearances for Great Britain. Nathan completed Ride to Wembley in 2018 was involved in a diplomatic incident when he and a group of riders unwittingly invaded the country home of the Prime Minister, Chequers. 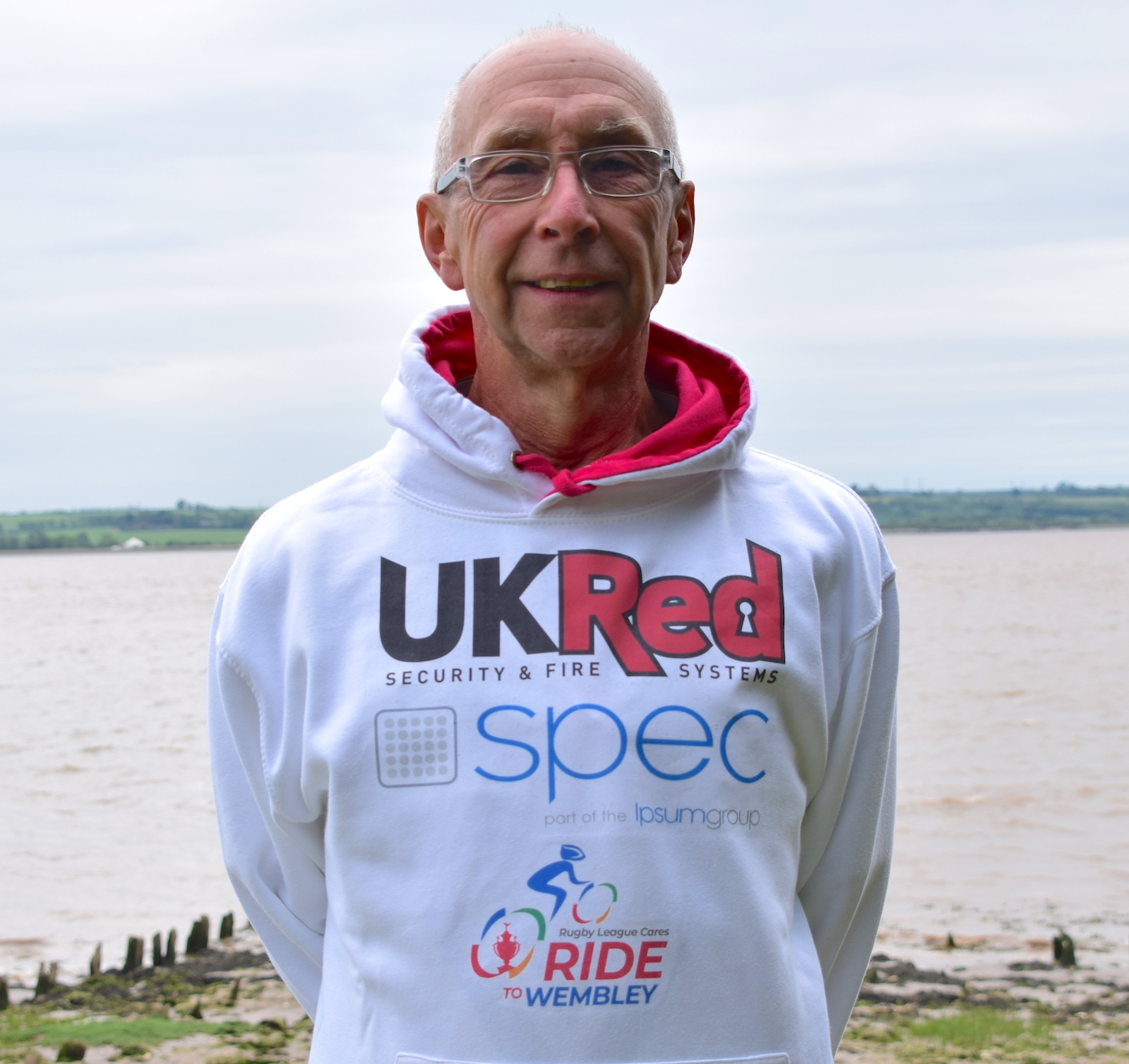 John is a semi-retired pharmacist from Hull who is taking part in Ride to Wembley for the second time.  A Hull FC supporter, John has to take some credit for persuading Gareth Ellis to come out of retirement during last year’s ride: we are unable to confirm reports that Gareth decided getting beaten up every week in Super League was less painful than riding alongside semi-retired pharmacists from Hull… 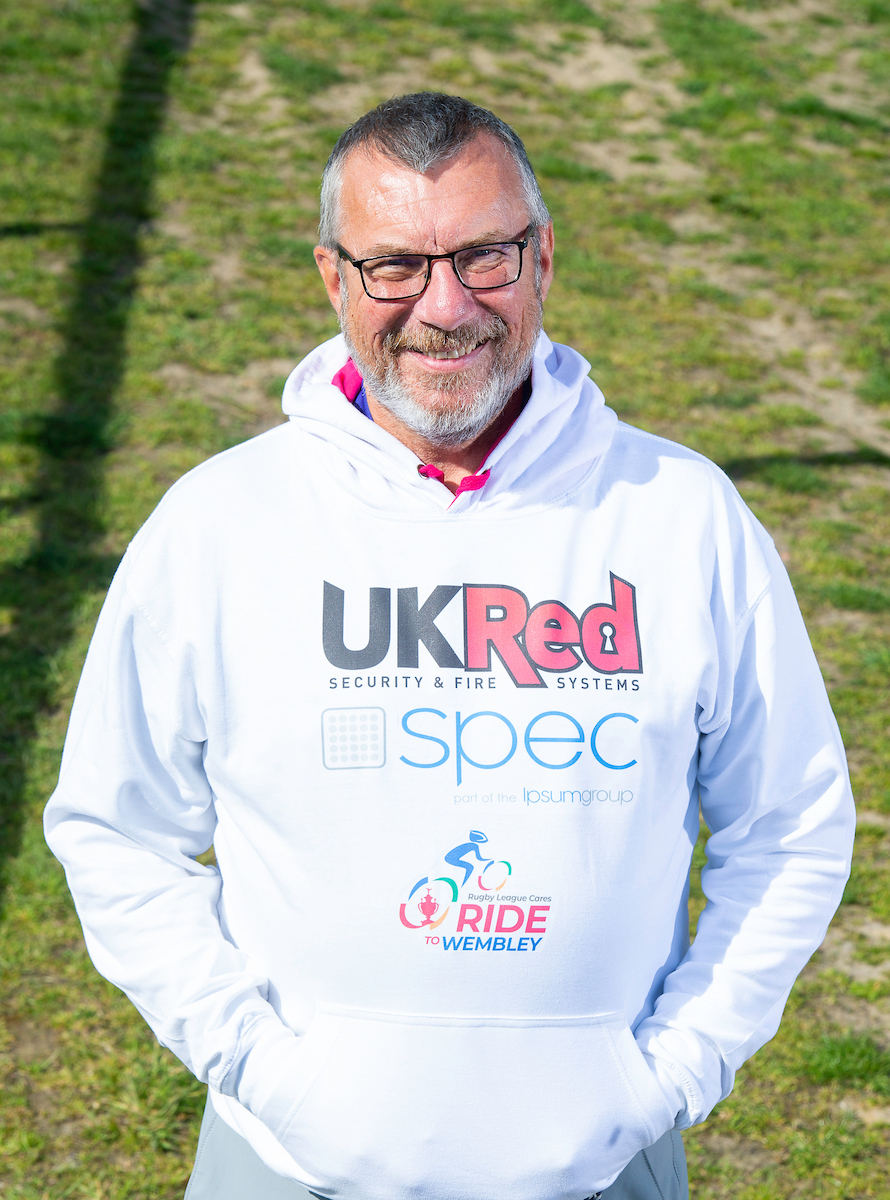 Kevin is Managing Director of Hull-based Informed Financial Planning and is involved in Ride to Wembley for the second successive year. A Hull KR fan, Kevin spent much of last year smiling through gritted teeth at John Johnson’s recollections of Hull’s Wembley wins in 2016 and 2017.  Ride to Wembley 2019 will be the longest continuous time Kevin has spent in the UK in recent memory. 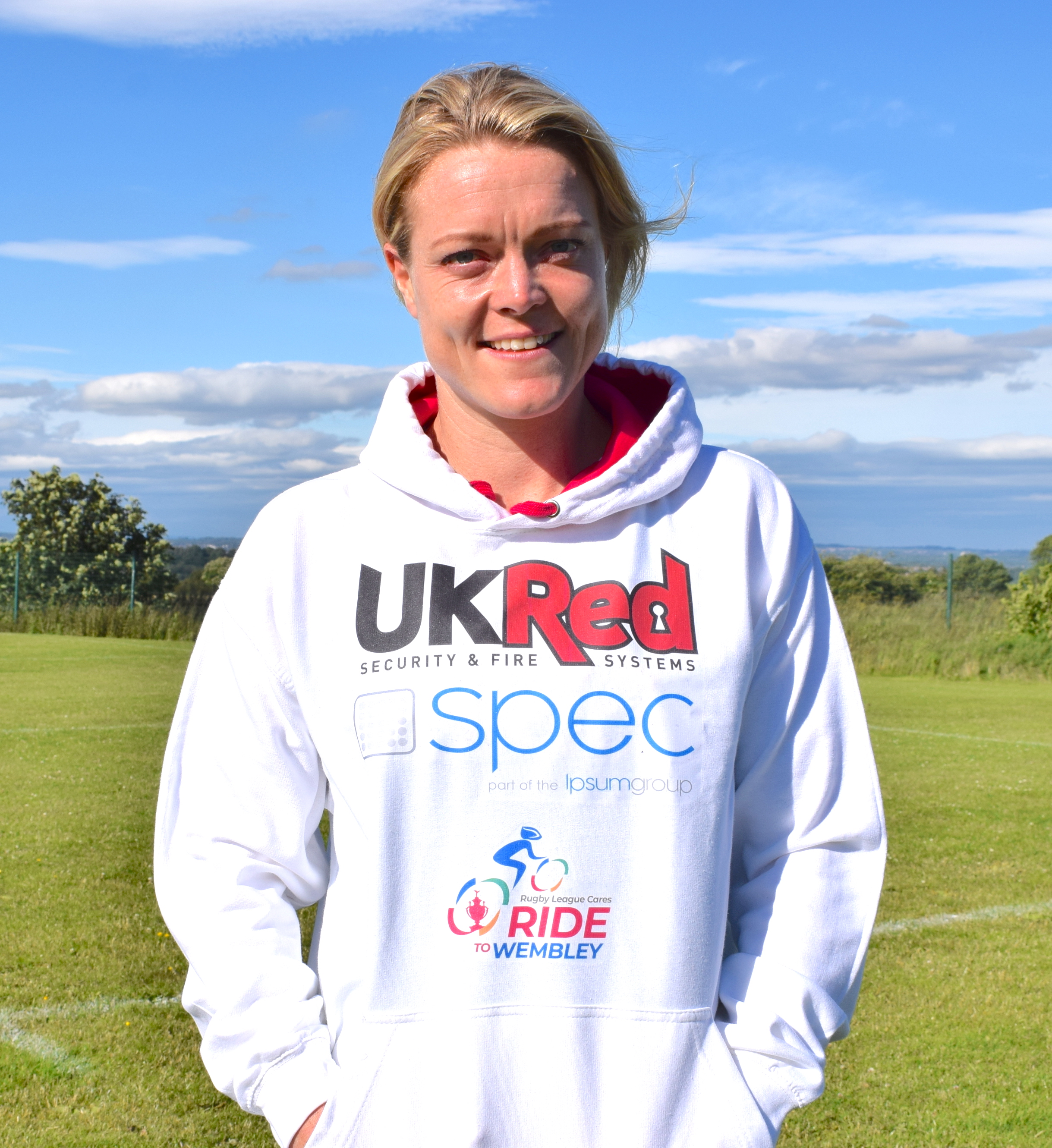 Beth was capped 22 times by England in a glittering playing career that spanned four World Cups until her retirement in 2018, when she moved into coaching as co-coach of Bradford Bulls alongside Kirsty Moroney.  A keen cyclist and fitness fanatic, Beth works as a project manager for Greater Manchester Moving, a campaign to encourage more people in the region to take up physical exercise and sport. 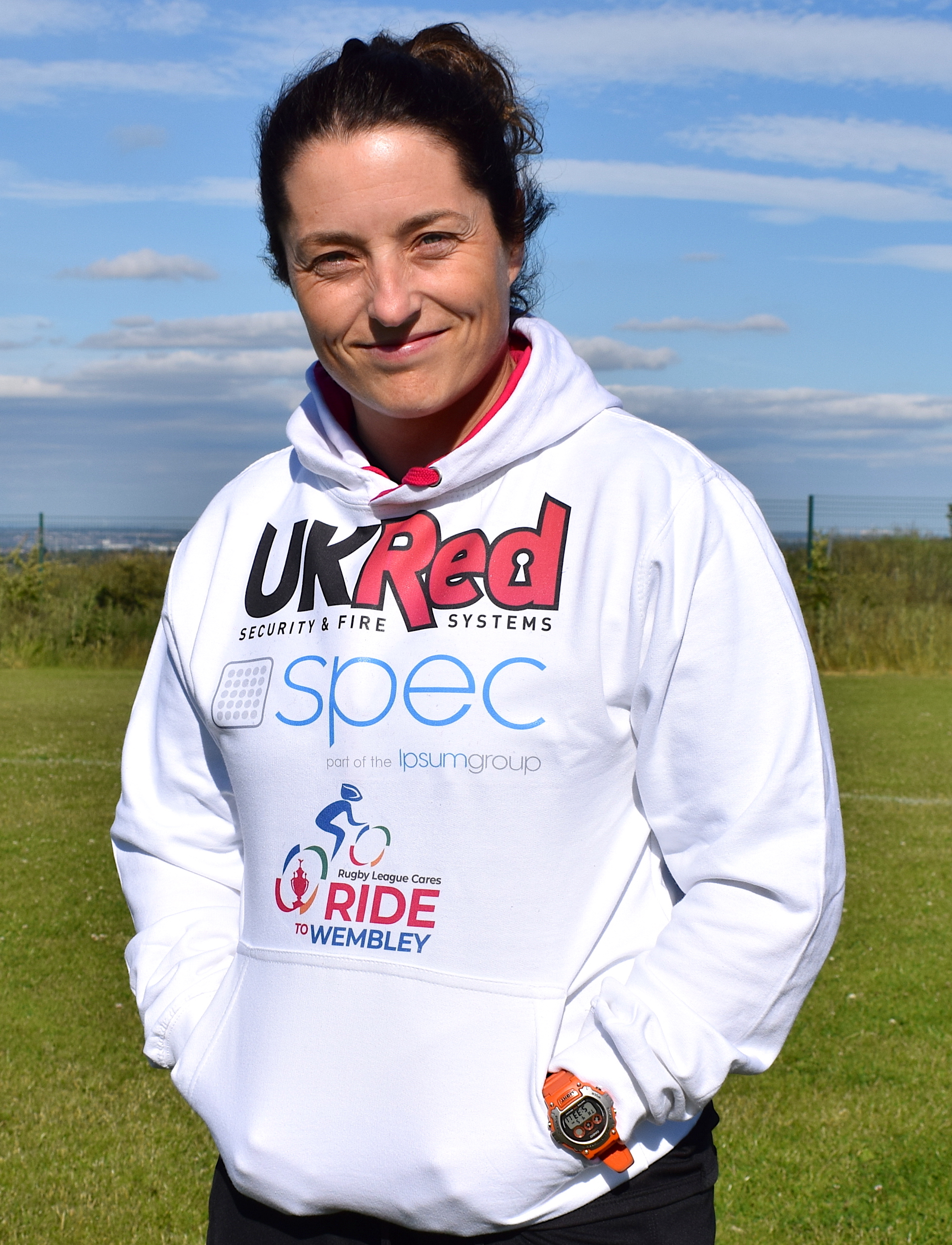 Kirsty played all her career at Bradford Bulls before hanging up her boots at the end of last season, bringing to an end a career that brought her 19 caps, including three World Cups. She is now the co-coach at Bradford with Beth Sutcliffe and a fierce competitor who sets high standards for both herself and her players. Kirsty works in the control room at West Yorkshire Fire and Rescue and lives in Halifax, so will be expected to set the pace on the steepest hills during Ride to Wembley… 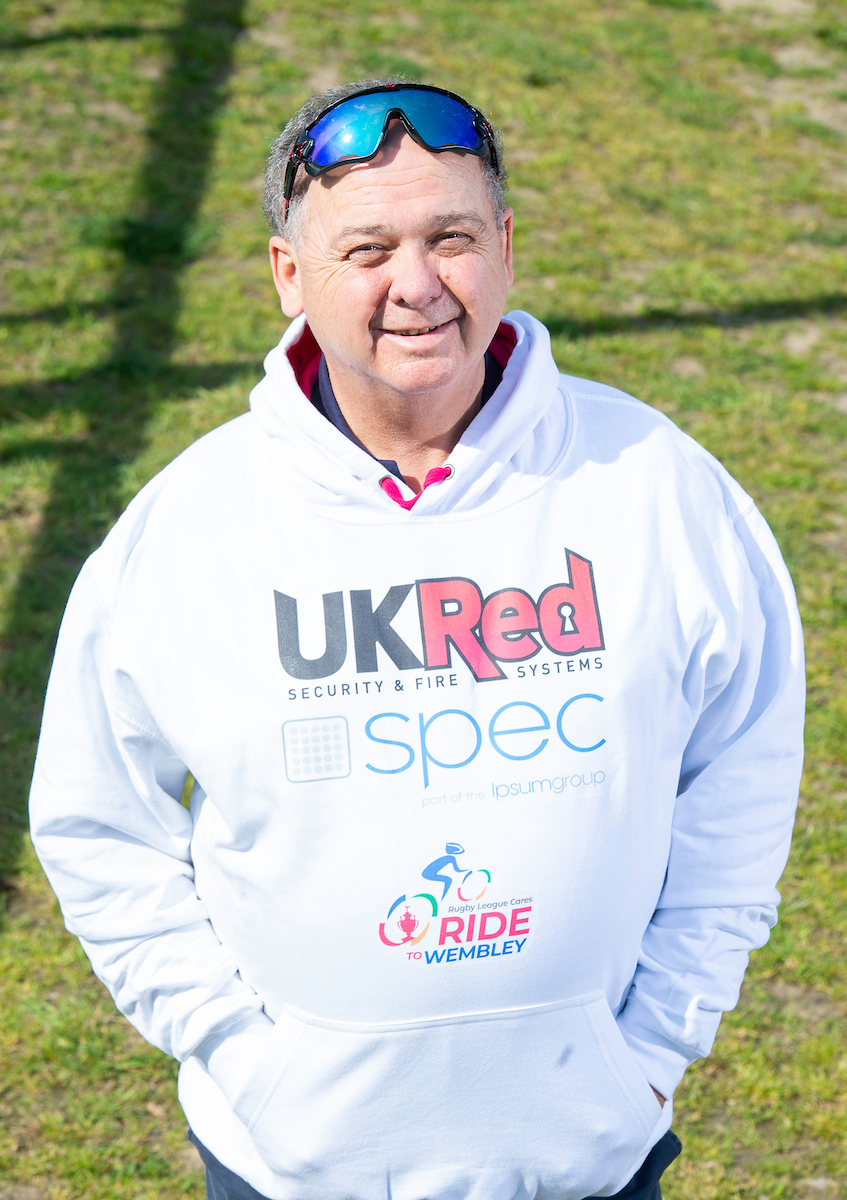 Neville is Executive Producer of In Touch Productions and was head of Rugby League on Sky TV for over 30 years before stepping down earlier this year. An Australian and proud Manly fan, Neville is a member of the RFL Roll of Honour and a keen supporter of RL Cares.  He is hoping to complete Ride to Wembley without cheating this year, having done three days of last year’s ride on an electric-powered bike after his mountain bike was stolen at the end of Day 1 in Buxton. 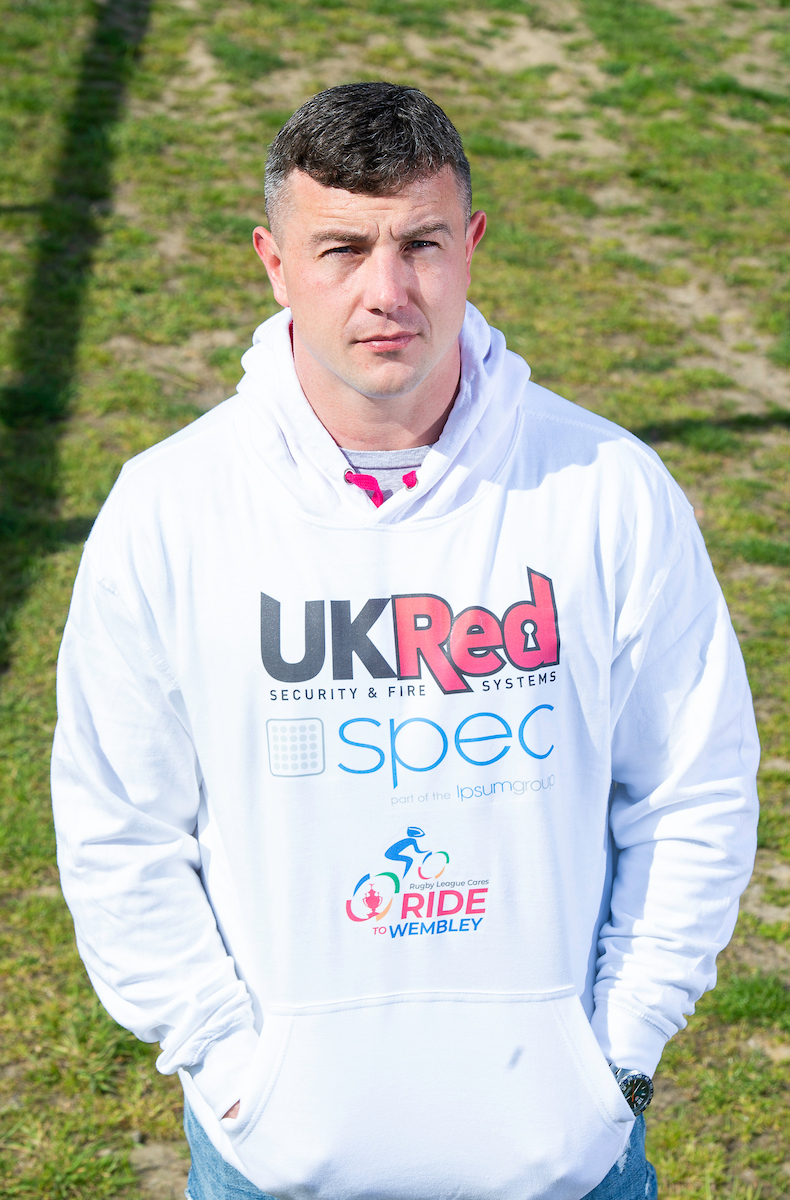 Chris spent five years at Wigan Warriors having played his junior rugby with Leyland and Bamber Bridge.  He was a member of the Wigan team that defeated Hull FC at Wembley in the 2013 Challenge Cup final. He joined Hull in 2014 but was forced into premature retirement after just 12 appearances with the black and whites due to a spinal injury. Chris now works as a Client Manager for The Sports Office in Manchester. 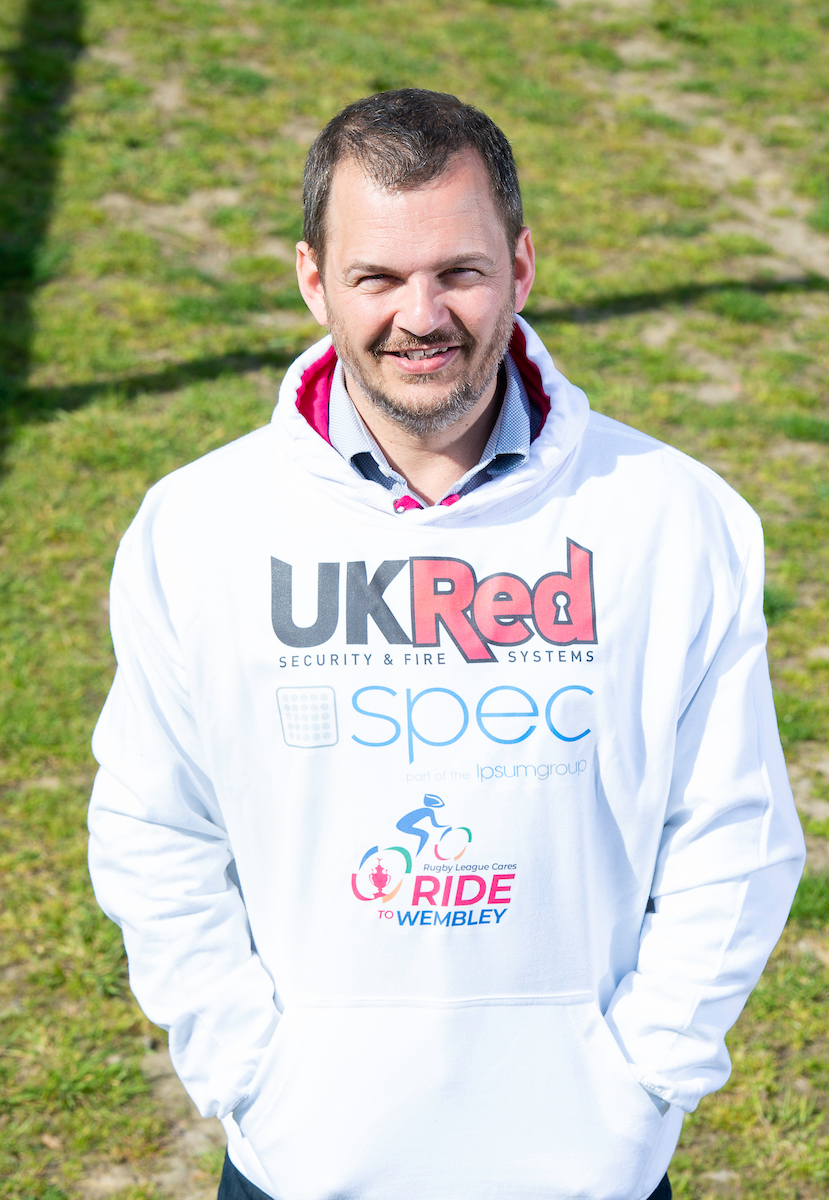 Kevin is managing director of the ride’s title sponsors UK Red Security and Fire Systems, a Leeds-based company that offers security solutions to domestic and industrial customers across the UK. Kevin devised the concept of Ride to Wembley and in the last two years has been responsible for more people getting lost than the ticket office at Hampton Court Maze. 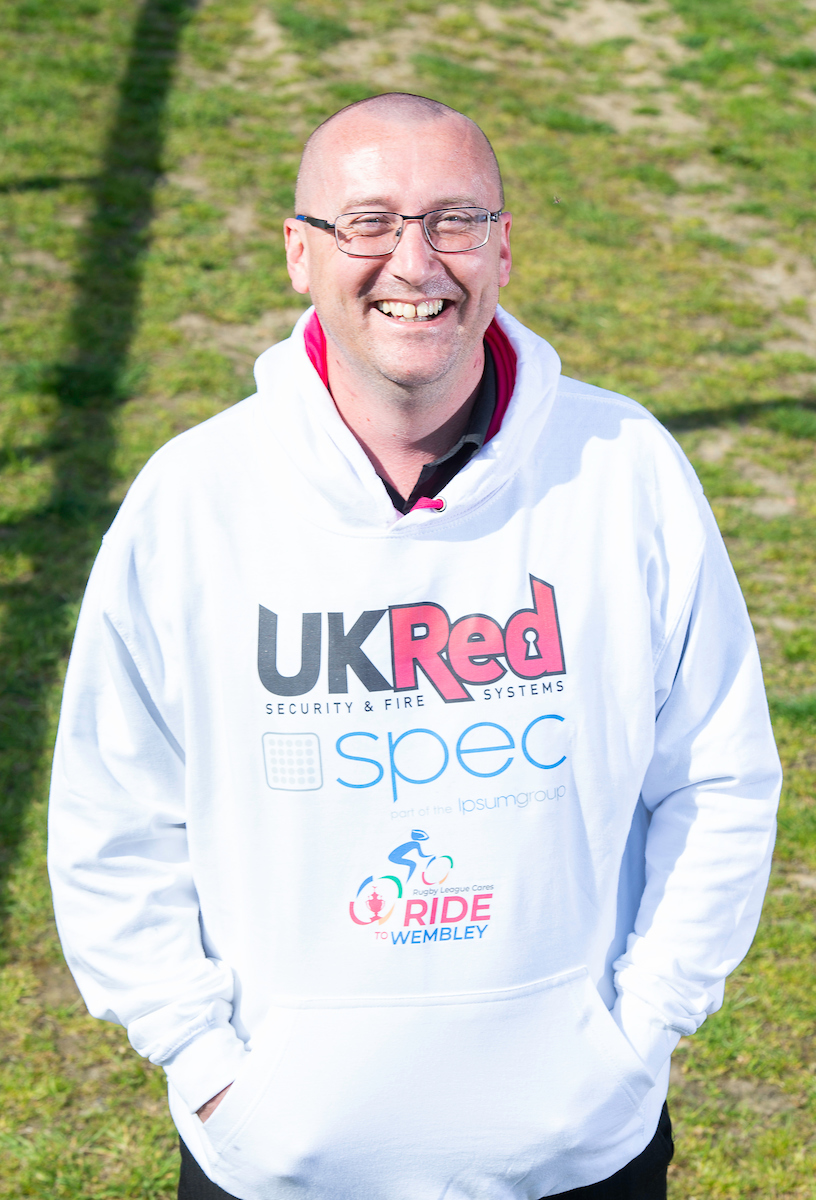 Dean is technical director at UK Red and, like Kevin Walton, a committed Leeds Rhinos fan who has been an ever-present on the Ride to Wembley since its inception in 2017.  Dean is the ride’s ‘fixer’ when it comes to repairing punctures and getting other riders back on the road, even when asked to perform miracles, as James Elston asks him to on a regular basis. 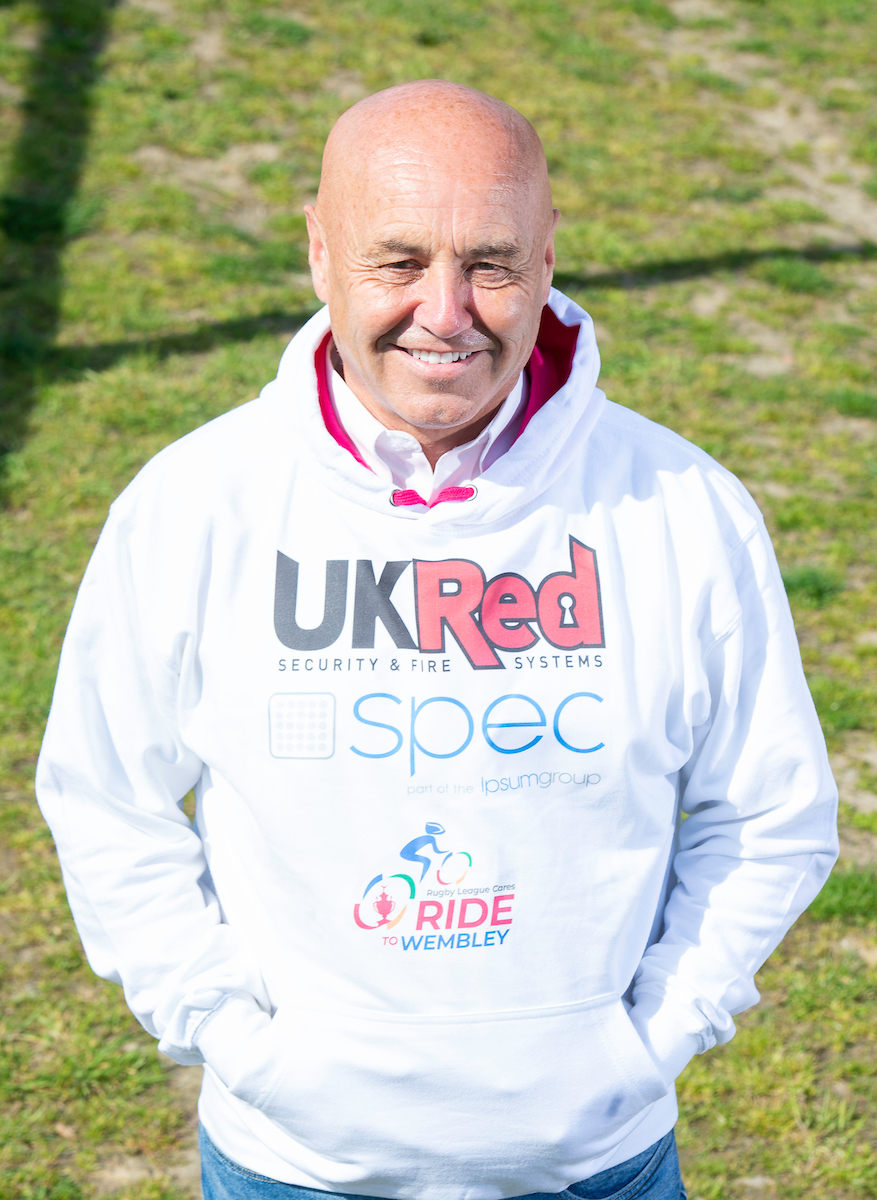 Ian is managing director of the ride’s Principal Partner, Spec Ltd, a Wakefield-based specialist engineering company. A passionate Leeds fan, Ian is taking part in the ride for a second successive year, having arrived at Wembley in 2018 despite a long, unexpected detour around Wendover Woods in the Chilterns on Day 4. 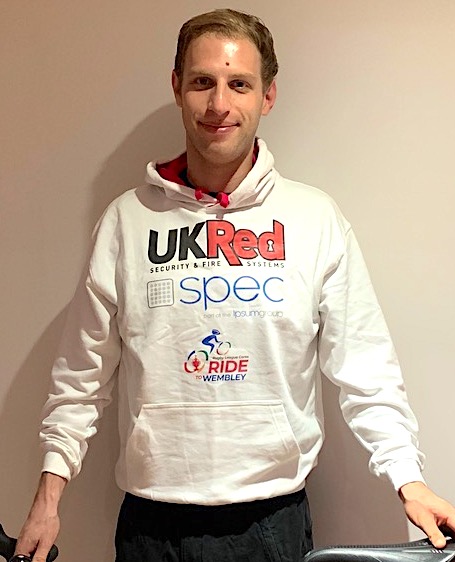 Henry is managing director of Transworld Business Advisors (UK) Ltd, a global company that advises company owners and prospective purchasers of businesses. Based in London, Henry is the grandson of Arnold Ziff, a former High Sheriff of West Yorkshire and philanthropist. 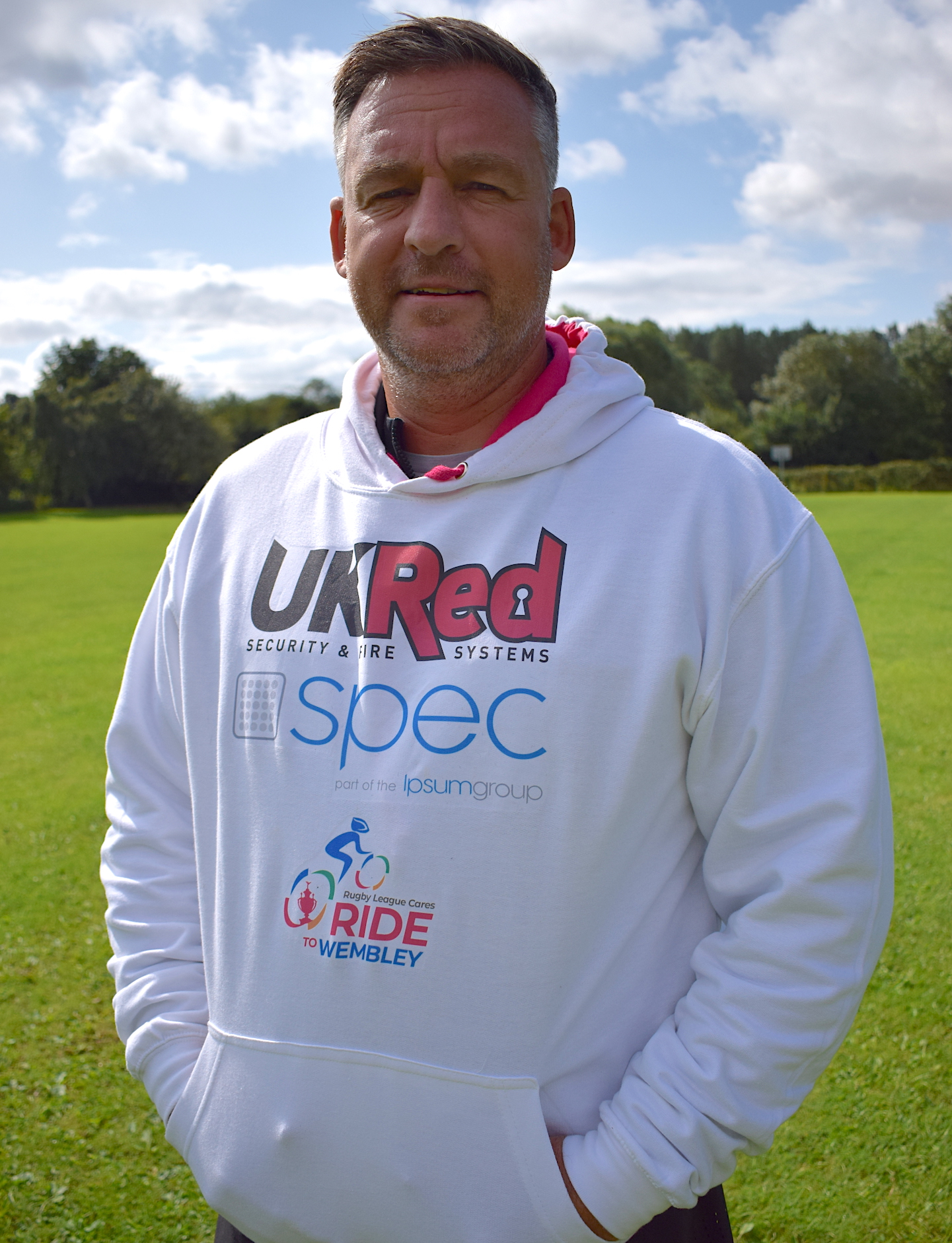 Darren is a Wakefield-based businessman and former semi-professional cricketer whose business interests include the Electric Theatre restaurant and bar in Ackworth. He also owns the Ultimate Fitness gym and regularly trains alongside Keith Senior. 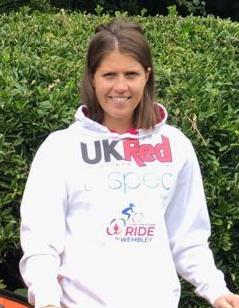 Amy is relationships manager for the ride’s associate sponsors and RL Cares Business Club partners, All Sport Insurance. A keen runner and occasional cyclist, Amy completed the ride in 2017 and 2018 when her level of fitness put many of the former players to shame. Has an occasional tendency to fall off into nettles and blame other people. 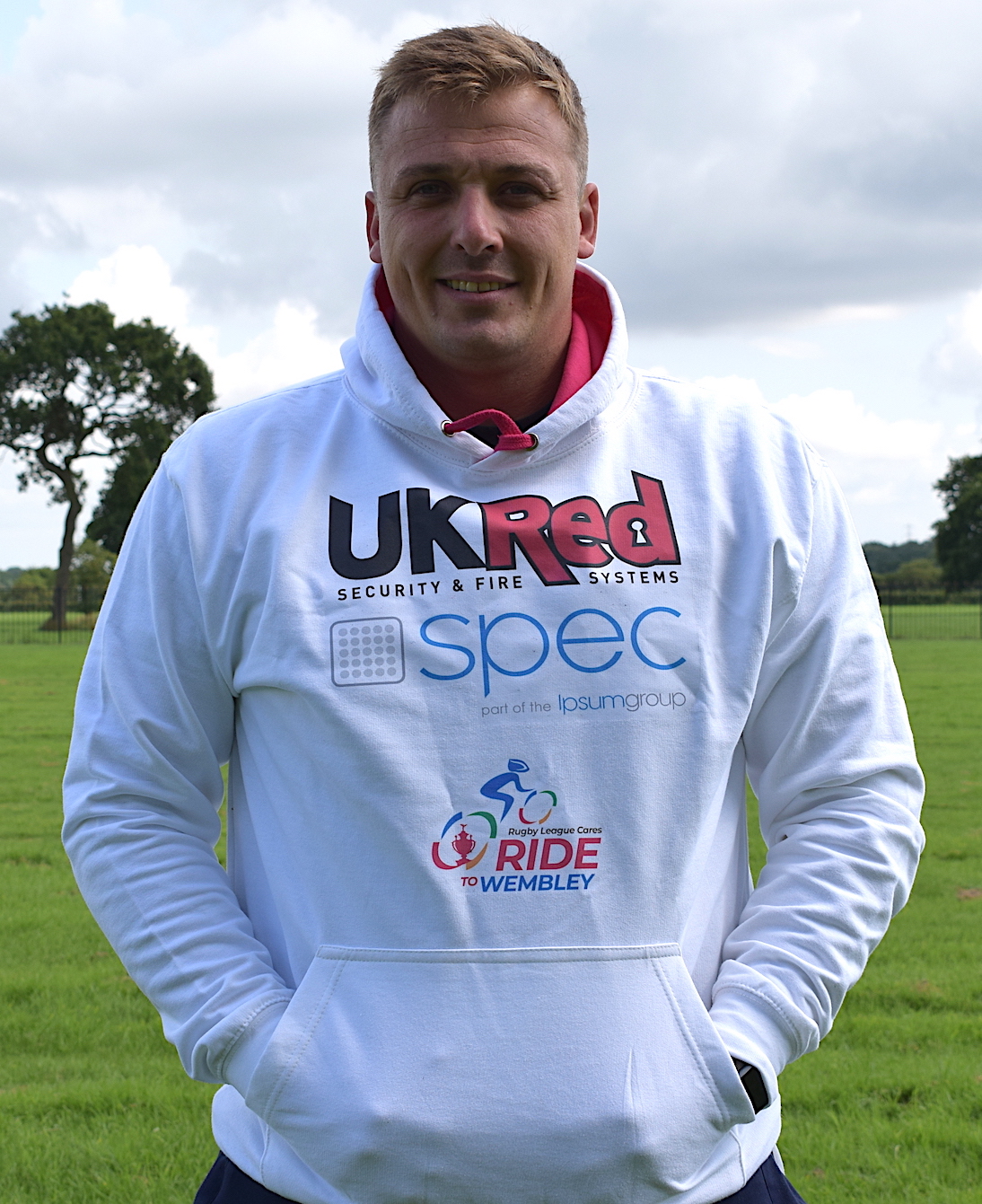 Lee is a former Leeds Rhinos, Bradford, Wakefield, Leigh and England three-quarter who is making his Ride to Wembley debut. He was a Super League Grand Final winner with Leeds in 2007, 2008 and 2009, and was awarded the Harry Sunderland Trophy as man of the match in 2008. 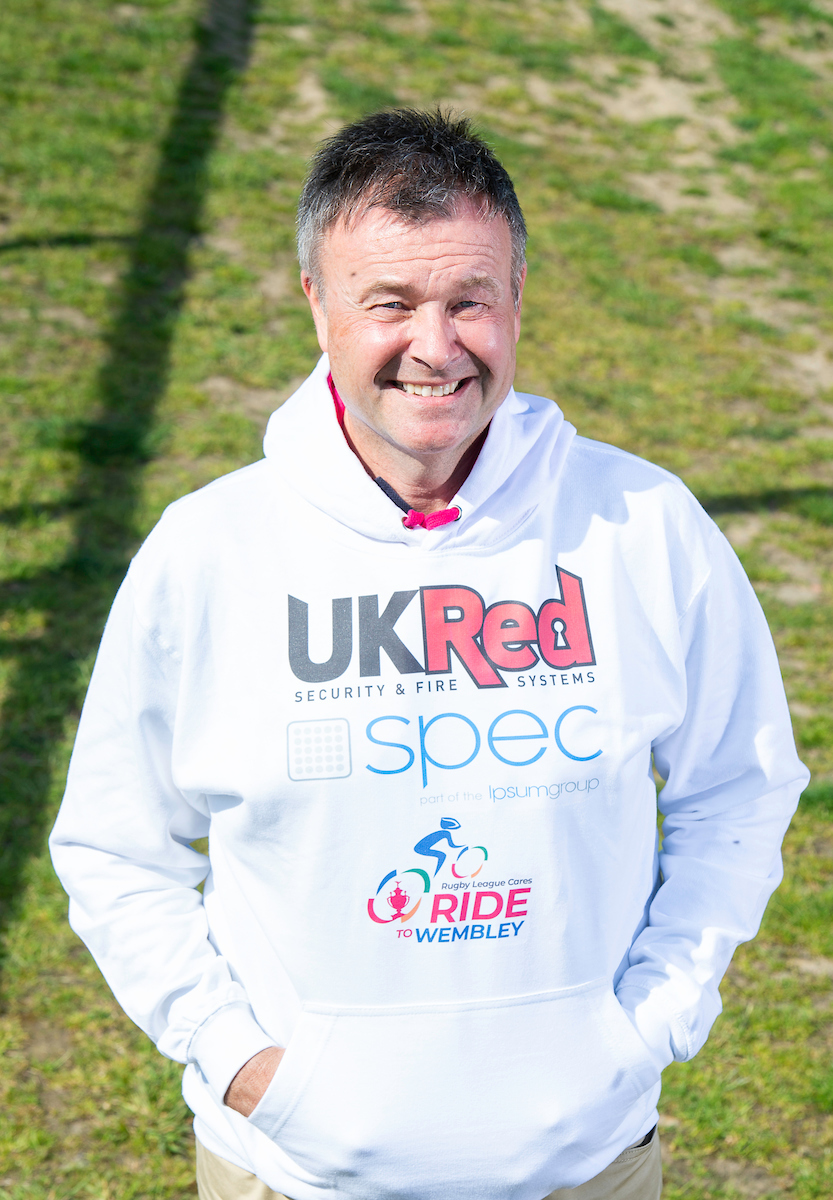 Tim is deputy general manager in sales and marketing for NGK spark plugs. A keen golfer and cyclist, Tim has been training hard for Ride to Wembley and has struggled to contain his excitement at the challenge of taking on the Pennine and Peak District hills… 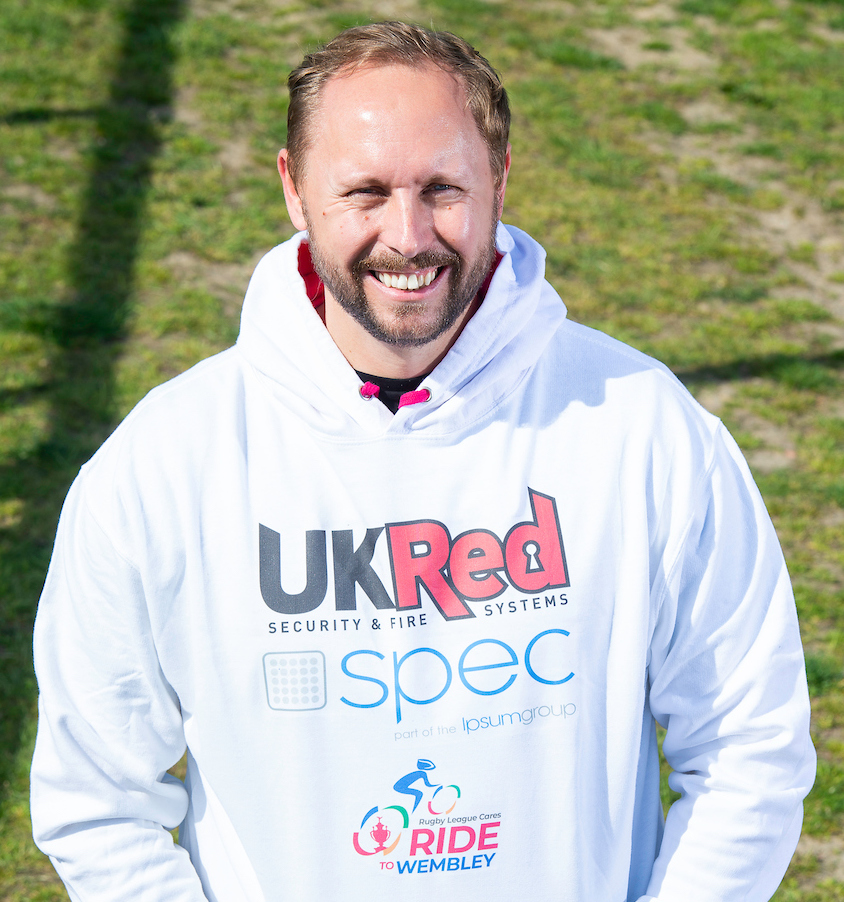 A former Wigan and Bradford Bulls junior, Simon in managing director of ride sponsors SDA Studio Architects, a Chorley-basedbespoke architectural practice that continues to win awards for its outstanding work. Simon made his debut on Ride to Wembley last year and was involved in the infamous Chequers incident alongside his former Bradford team-mate Robbie Hunter-Paul. 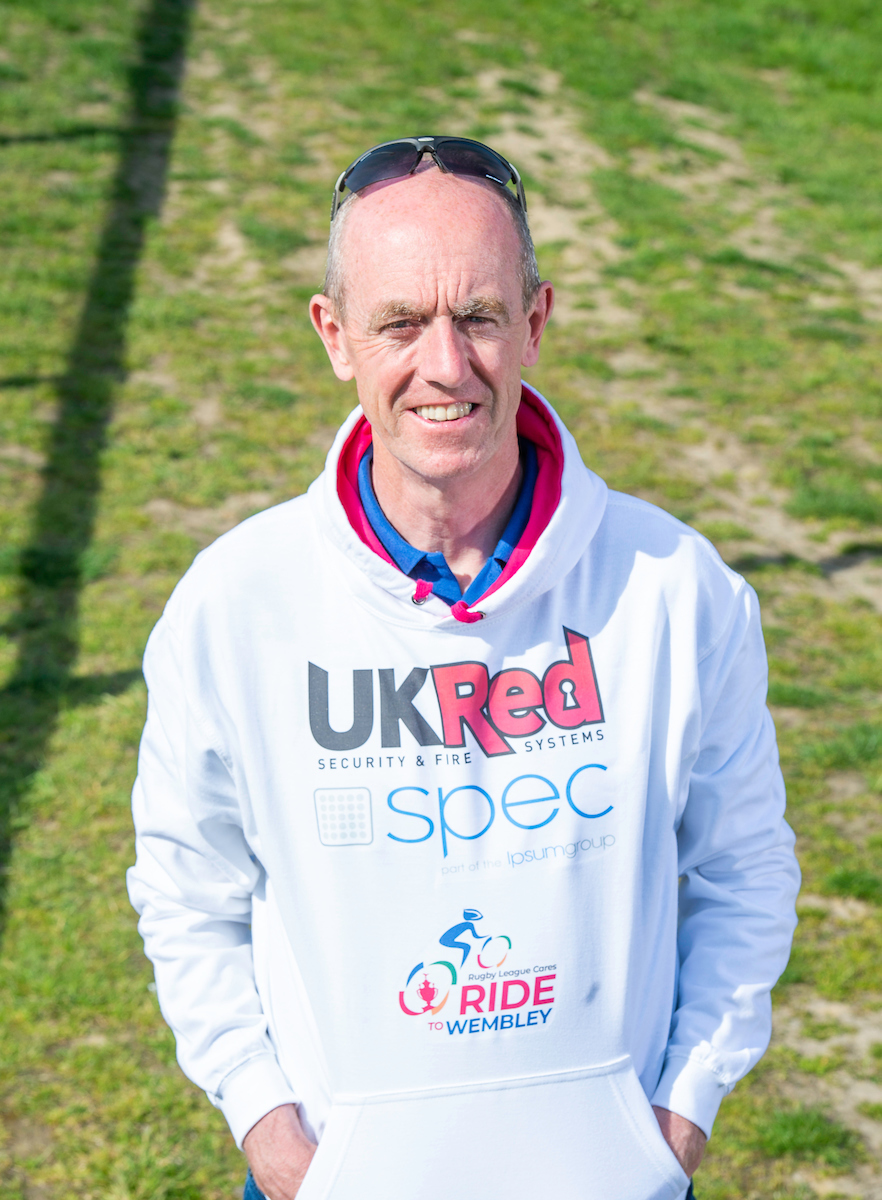 John was Rugby League correspondent for the Yorkshire Post between 1995 and 2009 and, writing as Ed Hughes, the RL correspondent for the Sunday Times for 10 years until 2009, when he joined the RFL as media manager. He joined RL Cares as communications manager in 2016. John writes a regular cycling column for the Yorkshire Post on riding the county’s toughest hills and is responsible for devising this year’s route. The only way is up… 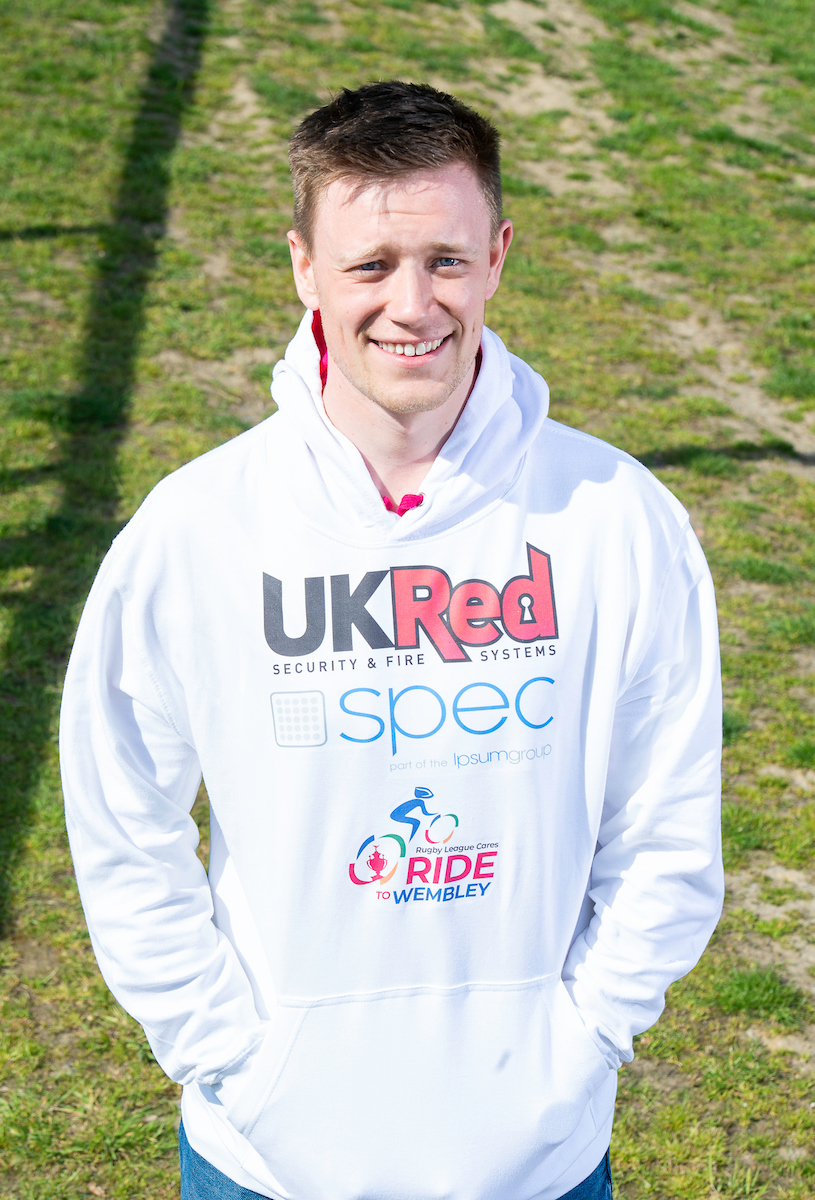 Liam is the Health Manager for RL Cares, his first position since he graduated from Edinburgh University in 2018. A former pupil at Hymers College in Hull, Liam is unashamedly of the black and white persuasion but has a fondness for red and white through his support for Manchester United.  A cycling novice, he hopes to have the stabilisers removed from his bike before the ride leaves Huddersfield. 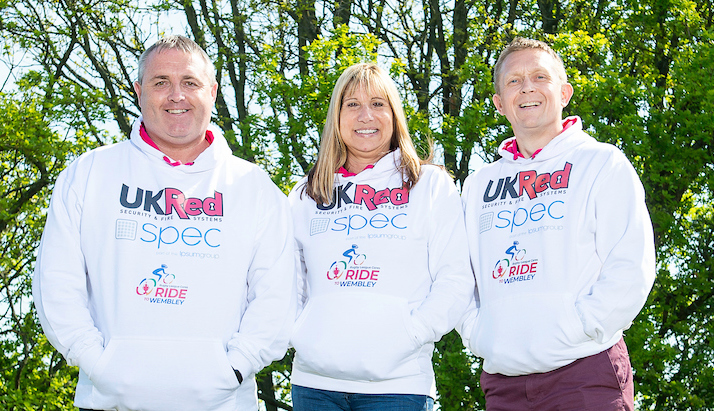