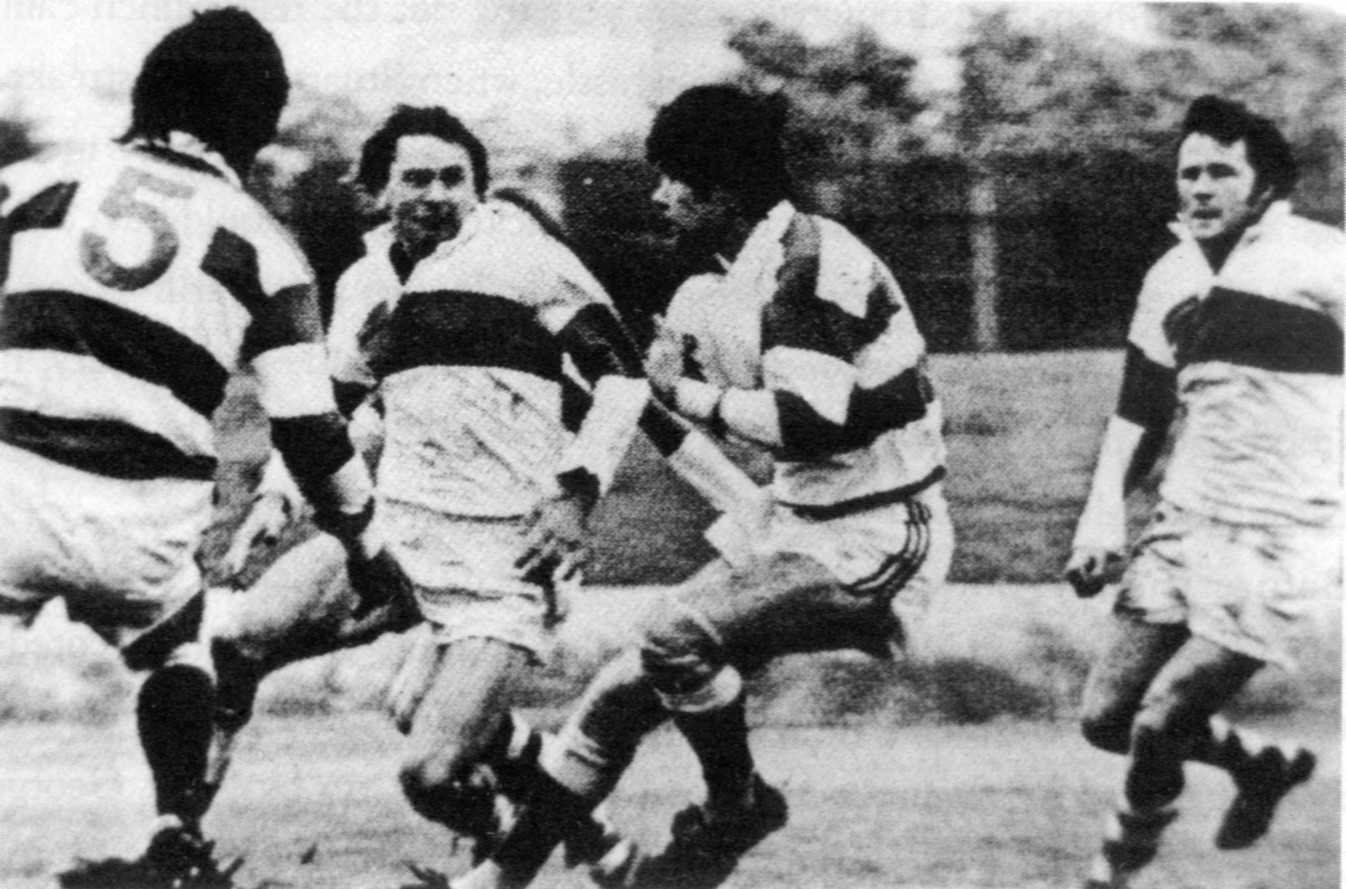 A wry smile lights up the face of John Burke as the former Wigan and Workington Town stand-off considers the difference the RL Benevolent Fund has made since the charity first entered his life 10 years ago.

“Well,” he says, the smile widening into a broad grin, “I hadn’t had a proper bath or shower for 30 years before the Benevolent Fund started to help me so I ought to smell a lot better now than I did back then!”

His comments are accompanied with a wink at Steve Ball, the General Manager of the RFL Benevolent Fund who is a regular visitor to John’s well-kept home between Leigh and Wigan, where the banter flows thick and fast.

John, who celebrates his 60th birthday on September 2, was one of the first players the RFL Benevolent Fund reached out to when it was established in 2004.

By that time, over a quarter of a century had elapsed since one of the most gifted players of his generation suffered a life-changing injury playing for Workington against Leeds at Derwent Park.

A young man who had just been named in the Great Britain squad for a Test series against France that autumn saw his international dreams shattered by a tackle which left him tetraplegic and confined to a wheelchair for the rest of his life.

Since making contact with him a decade ago, the Benevolent Fund has funded important modifications to John’s bungalow, including adapting his kitchen, landscaping the garden and installing a fully-functional wet-room with accessible shower and facilities.

“The shower cubicle was too narrow for me to get in safely: I had to edge in backwards and hold the shower head over my back while my carers helped me,” recalls John. “It was far from ideal but the Benevolent Fund have been brilliant and have really made a difference to my life.”

John was on track for a career at the highest level when he made his professional breakthrough as a precocious teenager at Wigan.

A former captain of the Leigh town team, John captained England schoolboys in the first-ever ‘Test’ series against the touring Australian Combined High Schools in 1971-72 before going on to play at Colts level with Warrington and Leigh.

“I have some great memories of playing for England Schoolboys, even though we didn’t win a game!” he recalls. “The Aussies played a brand of rugby we had never seen before, it was just incredible. A lot of those players went on to achieve great things, players like Craig Young, Les Boyd, Robert Finch and Ian Schubert.”

After playing for England Colts against France, John returned home to learn that Wigan, Leigh, Rochdale and St Helens were all keen to offer him a professional contract. Leigh, who he had supported all his life, were widely expected to capture the teenage stand-off or full-back but it was Wigan who won the day.

“As a Leigh lad it was a difficult decision and though my dad would have loved to see me play for the ‘Leythers’, he didn’t put any pressure on me and said it had to be my own decision,” he remembers.

“When I went to Wigan and saw the set-up at Central Park it was something special: not just the enormity of the ground but the way they treated me. The size of the contract was an influence but it was the whole package that hooked me.

“When you signed for Wigan you felt as if you were someone: I’m not saying that was the case with me but it felt like you were part of a bigger club with a big history and big ambitions.

“On one of my first days there a director came up to me and said ‘Welcome to Wigan, John. You’ve made the right decision, you’ll win trophies at this club.’

“When I signed the coach was a St Helens schoolteacher called Joe Coan but soon after he left and Vince Karalius came in with Peter Smethurst as the A-team coach.  I liked Peter very much, he was a fantastic person and coach who would listen as well as teach you things.

“My career progressed from there and I enjoyed my time at Central Park until I started getting a bit disgruntled with some of the directors. You’d tell them something in confidence and pretty soon they’d all know about it. I didn’t like that, and I wasn’t the only one.

“Players like Bill Francis, Jimmy Nulty, Bob Irvine, Bobby Blackwood and Brian Hogan all left in the space of a few months because the club wasn’t being run right.”

In 1977, John was transfer-listed by Wigan and shortly afterwards a fiercely ambitious Workington Town stepped in to pay a then club-record fee of £12,000 to secure his services.

“I remember travelling up with my dad, driving through the Lake District and saying to him ‘It’s a bloody long way to go for a game of rugby!’” adds John.

“Things moved quickly and I soon began to enjoy my rugby again at Workington.”

Having won the Lancashire Cup for the first time in their history in 1977, the West Cumbrian side began the 1978-79 season strongly with many of their hopes resting on the talents of John Burke.

Town acquitted themselves well in the first round of the Lancashire Cup, defeating Wigan 14-2 and after enjoying a bye in the next round welcomed Leeds to Derwent Park for a league match that would change John’s life forever.

“It was the day after my 21st birthday and I don’t really recall what actually happened,” he says. “I was told a pass came over in my direction that wasn’t meant for me, it was meant for the centre. I jumped up and caught it and fell to the floor in a seated position with my legs out.

“I was tackled while I was on the floor and because I was sat up, my head was forced forward with my chin to my chest.

“It was a double dislocation of vertebrae five and six. I do remember being in a lot of pain but not much else really.

“I should have gone to the spinal injuries unit on the day of the accident but they didn’t take me until the day after. To stand any chance of recovering from an injury like mine they say you have to be treated within four or five hours but that didn’t happen.

“I was taken to hospital in Whitehaven but there weren’t any doctors around so I spent the night there and I shouldn’t have done. Being there so long didn’t do me any good at all.

“Nowadays when you see a player get injured they carefully put a neck brace on and strap him to a spinal board: with me, I was lifted straight from the floor on to the stretcher and that’s when the damage could have been done.

“You can’t dwell on those things, though: it happened and now I try to live my life as well as I can.”

John spent almost a year in hospital in Hexham and Southport and, after spending weekends at home with his wife and infant daughter, it soon became clear that major changes were needed.

“We were living in a semi when I was discharged but I couldn’t manage in there so we got some money together: Workington had set up a trust fund and I used that money to buy land and build the bungalow where I live now,” says John.

“It’s a big house with wide doors and big rooms, which is great because it allows to keep my independence.

“I’ve had live-in carers for the last 15 years but before then, after my marriage broke up, I lived on my own.”

When they first met John, the Benevolent Fund discovered a pragmatic and positive personality who was making the best of circumstances that were far from ideal.

The limitations of the bathroom arrangements were problematic and John was struggling to access kitchen appliances from his wheelchair, having to use a stick to turn the kettle on and activate plug sockets.

“The RL Benevolent Fund has made a great difference to my life. It wasn’t here when I got injured but since its introduction, they have been marvellous,” says John.

“They have given me my independence back. I run a car on Motability which I pay for every month but the deposit can be quite expensive.  The Benevolent Fund have kindly paid the deposit, which means I can get out and about now.

“They support me greatly: if I want anything I contact Steve and we work something out. If they can help, they do.

“I know I speak for a lot of people when I say that the Benevolent Fund is a way for me that says you’re not forgotten, that someone is there for you at all times, no matter how long it was since you were injured.

“It’s also good to meet up with Steve regularly, even though he costs me a fortune in salmon sandwiches and biscuits every time he visits! At least when he’s eating my biscuits I’m spared his terrible jokes!”

For more information on the RL Benevolent Fund, including details of how to make a donation, please visit www.rflbenevolentfund.co.uk